The good news for the Atlantic Coast Conference? The league will have 10 bowl teams.

The bad news? The majority of them finished with 4-4 records in league play, which underscores the mediocrity that defined the conference in 2019 – well, with the exception of Clemson, of course.

The Tigers just completed a 12-0 regular season for a second consecutive year and will carry a 27-game winning streak into Saturday night’s ACC championship game in Charlotte.

Late-season runs by Virginia and Virginia Tech, who waged an impressive battle last week for Coastal Division supremacy, did help the league salvage some respectability, but teams ranked fourth through eighth in the power rankings last week all ended the regular season on a losing note. 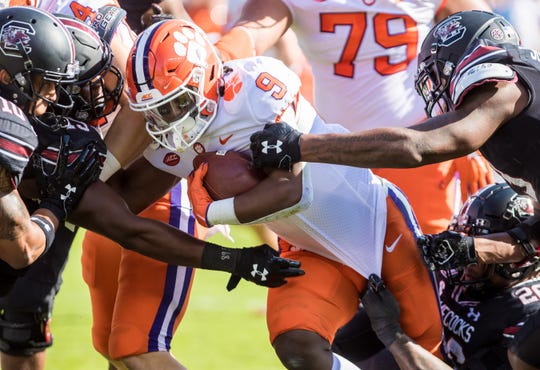 Clemson dispatched arch rival South Carolina 38-3 to put the finishing touches on yet another unbeaten regular season. The Tigers opened as a 28½-point favorite over Virginia, so it’s easy to see why they’re considered a major contender for a third national title in four years.

WINNERS AND LOSERS: Highs and lows from Week 14 in college football

Seven seasons, seven different Coastal Division champions. Virginia became the latest to claim the Coastal prize thanks to versatile quarterback Bryce Perkins, who accounted for 475 of the Cavaliers’ 494 yards as Virginia snapped a 15-year losing streak to Virginia Tech.

When Virginia Tech lost to Duke 45-10 in late September, it looked like the season might be a wash for the Hokies. But Justin Fuente got his team to regroup and make an impressive run to the doorstep of a division title. The Hokies came up a little short, but a young team bodes well for next season, especially with the emergence of quarterback Hendon Hooker.

The Cardinals took it on the chin from SEC and in-state rival Kentucky in their season finale, but that’s not enough to diminish their remarkable turnaround. After a two-win season a year ago, first-year coach Scott Satterfield guided his team to seven wins and bowl berth after being tabbed for a last-place finish in the Atlantic Division.

The Deacons suffered a disappointing loss at Syracuse to close the regular season, but maintained their ranking primarily because everyone else in the league’s mid-range lost as well. There will be no Orange Bowl for Wake Forest, but there will be a decent bowl and a chance for a nine-win season, which haven’t been regular occurrences in Winston-Salem.

The Seminoles closed the regular season with a 40-17 loss at Florida, a game in which the same woes that have plagued the team all season showed up once again – sacks and penalties. Florida State surrendered eight sacks for the third time this season and were penalized 13 times, which make it hard to stay competitive for long. The Seminoles didn’t; it was 30-7 at the half. Now it’s time for the Seminoles’ coaching search to heat up.

Boston College, the epitome of a .500 team, wrapped up its regular season in impression fashion, winning at Pittsburgh to clinch a fourth consecutive bowl berth and sixth in seven years under Coach Steve Addazio. Too bad Addazio won’t be around for the trip; he was fired on Sunday after going (you guessed it) 44-44 with the Eagles.