Efe Obada has taken the next step in his career, joining the Buffalo Bills on a one-year deal after four years with the Carolina Panthers.

After his most productive season in the NFL, which yielded 5.5 sacks, Obada became a restricted free agent.

And while Carolina declined to offer him a new deal, he moves to a new home with plenty of familiar faces – former Panthers D-linemen Mario Addison and Vernon Butler are also in Buffalo. 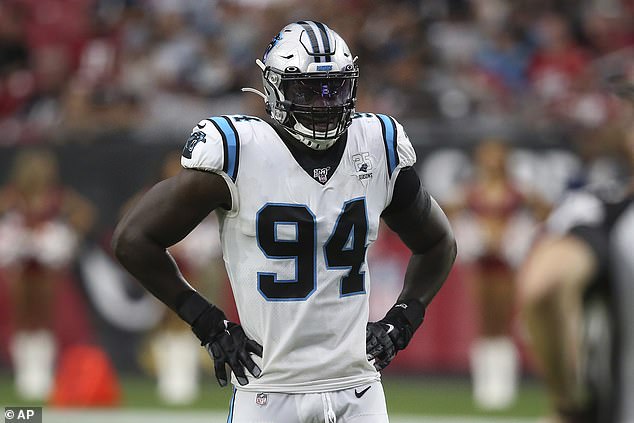 And 28-year-old Obada, who became a fan favourite in Carolina, bade an emotional farewell to Charlotte and its people.

‘Throughout my time in Carolina you have shown me nothing but love and support,’ he said in a statement on Twitter. ‘You have cheered for us on Sundays win or lose and followed me to London and back.

‘You aren’t a fan base, you are a family. My family and you always will be. I love you guys from the bottom of my heart.

‘Growing up in foster care I learnt moving around is part of life. The only difference this time is, I’ve never lived in a place where I’ve loved the people and they’ve loved me back.’

‘I will always be grateful to the Panthers organisation, Coach Ron and Marty Hurney for giving me this opportunity and my start in the NFL.’

Obada featured in 42 games over the past three seasons, with 50 tackles, 7.5 sacks, an interception, a forced fumble and two fumble recoveries.

Although slated as a defensive end, he was a key rotational piece all along the Panthers’ front last season, playing in all 16 games.

Among his 5.5 were future Hall of Famers Tom Brady, Aaron Rodgers and Drew Brees and it was Obada who recorded the final regular season sack of Brees’s career. 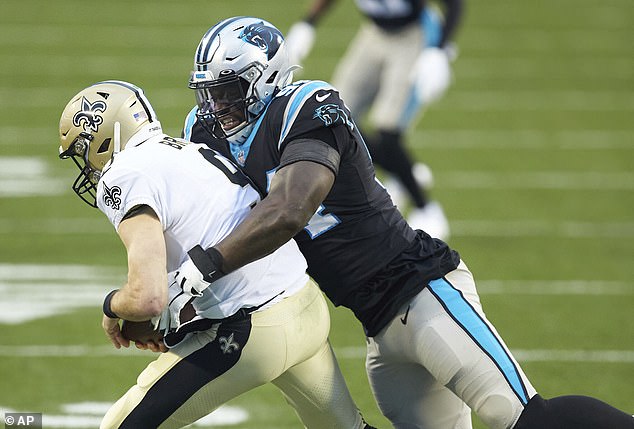 Obada, who was trafficked to England from Nigeria at the age of 10 with his sister, spent some of his teenage years on the streets of London.

After moving around foster homes, he found a hobby in American football, taken up after a chance meeting with a friend.

After a short spell with the London Warriors, Obada earned a trial with the Dallas Cowboys. Spells at the Kansas City Chiefs and the Atlanta Falcons followed, before he joined Carolina in 2017 as part of the NFL’s International Pathway Player Programme.

Rather like Obada’s career, the Bills have improved incrementally under McDermott and reached the AFC Championship last season, losing to the Kansas City Chiefs.

And Obada will also find a familiar accent on the practice squad, with Christian Wade also attempting to take the next step in his NFL career.