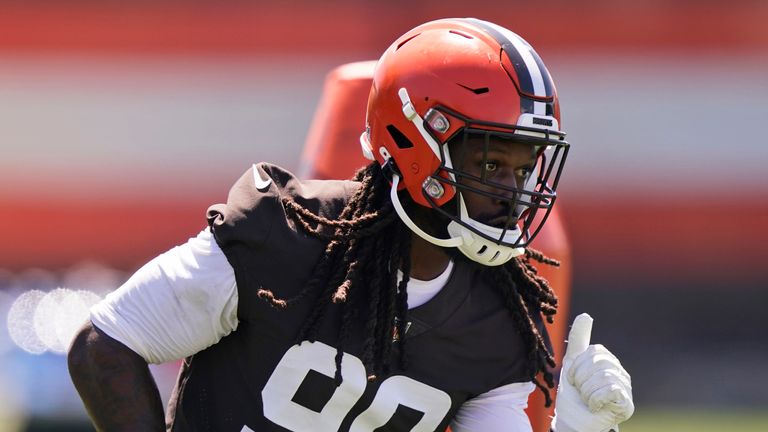 Jadeveon Clowney is shattering preconceived notions, harassing quarterbacks and making quite an impression in his first training camp with the Browns.

Signed by Cleveland to a one-year, $8m free agent contract in April, Clowney has put on a show during the first week of practices. No 90 is everywhere.

Whether pressuring Baker Mayfield into rushing a pass or flashing his unique combination of size and quickness while doing drills alongside fellow athletic freak and former No 1 overall pick Myles Garrett, Clowney, whose career has been slowed by injuries, is giving the Browns a glimpse of what he can do. And, perhaps, one to himself as well.

“I don’t think I’ve reached my potential,” said Clowney, playing with his fourth team in four years. “Every time I get going, I get hurt and something happens. I’ve fallen back and taken time off.

“Hopefully, this year I just keep going up and getting better.” 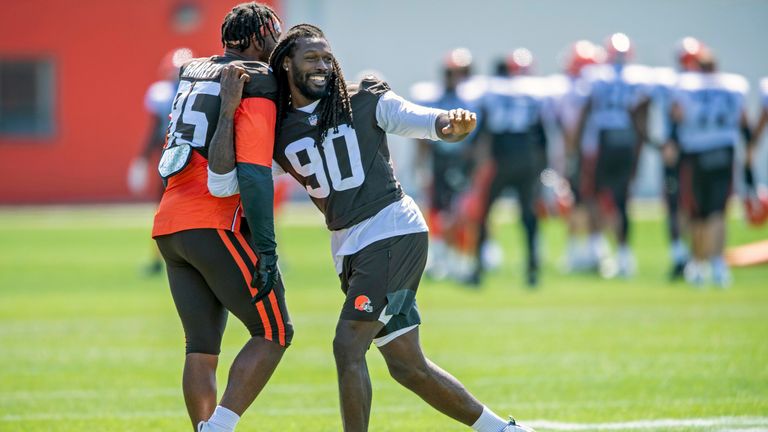 During Tuesday’s practice, the first this summer for the Browns in full pads, Clowney got the better of Pro Bowl right tackle Jack Conklin several times. The 6ft 5in, 255lb specimen was a constant presence in Cleveland’s offensive backfield.

“At the start of all our defensive meetings, we list the bone collectors of the day and he was our Bone Collector,” said rookie linebacker Jeremiah Owusu-Koramoah, describing the award given to defensive players for being disruptive. “He definitely shined for us.”

Clowney has been glowing since he arrived in Cleveland. The 28-year-old spent last season in Tennessee, where a season-ending knee injury limited him to just eight games.

That’s been the story of Clowney’s NFL career – injuries and untapped promise.

In the first game of his rookie season with Houston, Clowney, who played through a sports hernia injury in his final season at South Carolina, injured his right knee and needed surgery. Eventually, he needed a microfracture procedure to fix it.

“Crazy, right?” he said, shaking his head. “First game of my career.”

Myles Garrett, Jadeveon Clowney and the Browns DL getting after it today on the sled. #Browns pic.twitter.com/dWWKGcVaXf

Clowney has dealt with foot issues, elbow sprains, concussions, lower back problems and groin strains. His left knee required surgery last season, forcing the Titans to put him on injured reserve in November.

Clowney feels good physically now, and he’s again confident he can be the kind of player he always wanted to be.

“When you are healthy, you have a lot of fun,” he added. “When you have been playing for seven years and I have been dealing with injuries seven years, it is kind of not fun being out there, but when you are taking care of your body, you are in good health and you know what you love.

“It’s fun and exciting to be out there moving around and feeling good.”

The Browns want Clowney around for the entire season, so they’re going to closely manage his workload. He got a planned day off Wednesday and was a casual observer on the sideline after doing some conditioning work. To this point, Cleveland has been pleased with Clowney, who developed a reputation for being selfish and disconnected in Houston, Seattle and Tennessee.

“Jadeveon is doing a really nice job,” said coach Kevin Stefanski. “I enjoy having him out here. He’s lively presence. He’s a good team-mate. He enjoyed practising and enjoys running around. I see that from him. You mention the meeting rooms, he has been on point.

“He is trying to learn what we are doing and learn these techniques. He has been so far so good.”

The pairing of Clowney and Garrett could be frightening for offensive lines. They’ve forged a fast friendship, and Clowney has been impressed by the All-Pro’s ability to turn the corner and get to the quarterback.

“The way he bends and stays low the whole time, he has a crazy spin move,” Clowney said. “He is basically unstoppable. Good luck to the tackles out there. I’m just happy to be on the same side as Myles, because I think it is going to help me out this year.