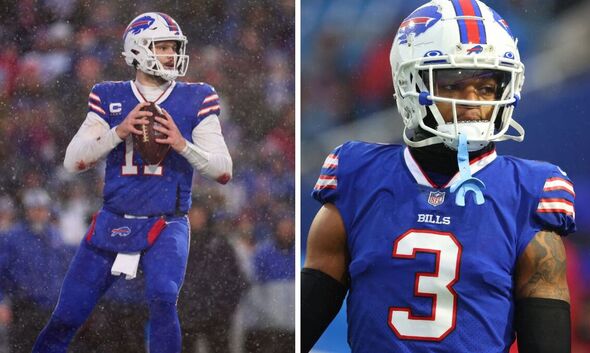 NFL star Josh Allen has criticised fans for believing the Damar Hamlin ‘body double’ conspiracy that spread after the Buffalo Bills lost to the Cincinnati Bengals in the NFL playoffs. Hamlin was in attendance at Orchard Park to cheer on his team-mates – but the Bengals secured a 27-16 road victory.

Just weeks after he suffered a cardiac arrest on the field against the Bengals, Hamlin made his first public appearance when he attended the Divisional Round clash in Buffalo on Sunday. He has not spoken publicly since the incident, although he live-tweeted Buffalo’s epic 35-23 win over the New England Patriots from his hospital bed at the University of Cincinnati Medical Center.

Hamlin still faces a length rehabilitation as it remains just three weeks since the horrific incident saw him need to be resuscitated on the field in Cincinnati. However, the safety was with the Bills in the locker room ahead of their Divisional Round clash with the Bengals on Sunday, with the team posting a video of him arriving on social media.

However, some fans began suggesting Hamlin was not in the suite as it appeared when the broadcast showed him hyping the crowd amid the blizzard.  The conspiracy theory claims it was instead a body double sat with Hamlin’s family, who did his trademark heart symbol with his hands.

The conspiracy started as Hamlin was seen wearing a scarf, gloves, hat and glasses so people began to believe he wasn’t at the stadium at all. Bills quarterback Allen quickly debunked the theory and declared Hamlin was absolutely present during the postseason contest.

“Yeah, that’s stupid,” Allen said on his segment Kyle Brandt’s Basement. “Are there mainstream media outlets pushing this? One, that’s Damar’s swag – that’s what he likes to wear. Two, he was in the locker room with us pre-game so yes, that was Damar.

“There’s absolutely zero chance. He’s Damar Hamlin, that’s our guy. That’s our brother. He was with us pre-game, post-game and up in the suite with his family and little brother, one hundred percent.

While he was discharged from Buffalo General Medical Center last week, Hamlin still faces hurdles in his recovery. His release came five days after his doctors announced the NFL ace was breathing on his own, walking, talking and there were no signs of neurological damage.

Buffalo head coach Sean McDermott revealed Hamlin has begun making regular visits to the team’s facility. McDermott insisted he was taking it ‘a baby step at a time’ and added Hamlin is ‘dipping his toe back in here and getting on the road to just getting back to himself’.

Kliff Kingsbury: Cardinals 'know we've got to improve a lot' before even thinking about playoffs