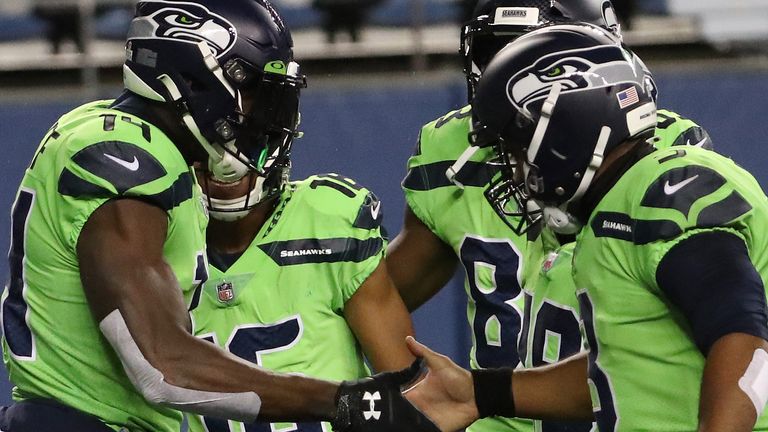 Russell Wilson threw a six-yard touchdown pass to D.K. Metcalf with 15 seconds left as the Seattle Seahawks came back from a 13-point half-time deficit to defeat the Minnesota Vikings 27-26 on Sunday Night Football.

Wilson completed 20 of 32 passes for 217 yards and three touchdowns, helping the Seahawks improve to 5-0 for the first time in franchise history. Minnesota slip back to 1-4 and the foot of the NFC North standings.

Seattle didn’t have things all their own way, however, as Minnesota raced out to a 13-0 lead on the strength of their ground game, with the league’s leading rusher entering the weekend, Dalvin Cook, tallying 65 yards and a TD off 17 first-half carries.

However, the Vikings lost Cook to a groin injury when pushed out of bounds on the very first play from scrimmage of the second half and the Seahawks then proceeded to score 21 unanswered points in the third quarter to storm ahead.

Vikings QB Kirk Cousins aided the Seattle scoring, fumbling the football and throwing an interception – both gathered up by linebacker K.J. Wright – to gift the Seahawks a short field for two of their touchdowns.

Cousins recovered – 27 of 39 for 249 yards – throwing a pair of touchdowns to Adam Thielen to again have Minnesota ahead, while second-year running back, and back-up to Cook, Alexander Mattison continued to find holes in the Seattle run defence.

But the key moment of the game came when the Vikings opted against kicking a field goal that would have given them an eight-point lead with two minutes left, instead choosing to go for it on fourth-and-one from the Seattle six-yard line in the hope of either scoring to further extend their lead or at least pick up a first down, allowing them to run down the clock.

However, Mattison and the Vikings run game was finally stopped and Wilson led a 94-yard drive down the field in the final minutes, winning the game with a six-yard strike to Metcalf on fourth-and-goal with 15 seconds left.

It capped another impressive outing for sophomore receiver Metcalf, who clocked up over 100 yards for the third successive game. Another of his six catches proved particularly crucial earlier on in the game-winning drive as Wilson found him for a 39-yard reception on a fourth-and-10 to keep the game alive.

Sky Sports NFL is your dedicated channel for NFL coverage through the season – featuring a host of NFL Network programming, a new weekly preview show as well as at least five games a week and NFL RedZone, you won’t miss a moment.

The Monday After: Let’s hold off on the debate for now, Washington assistant burns Wazzu

Where are the star players of Netflix’s ‘Last Chance U’ now?