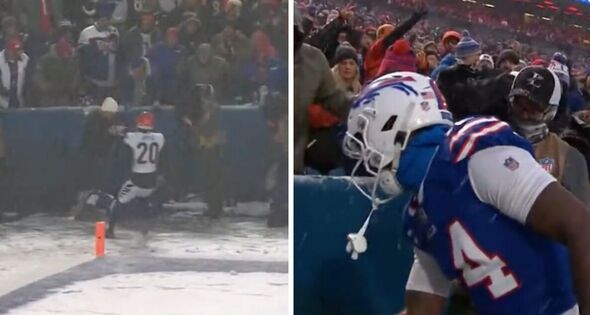 NFL star Stefon Diggs apologised to a photographer after crashing into the onlooker during the third quarter of the Buffalo Bills’ clash with the Cincinnati Bengals in the playoffs. The Bills were looking to reduce the deficit when quarterback Josh Allen targeted Diggs in the endzone only for the pass to fall incomplete.

With just under 10 minutes remaining in the second quarter, the Bills were trailing the Bengals 17-7 after Joe Burrow threw two touchdowns in the first half amid falling snow. The conditions were clearly impacting some of the players throughout the early stages with several stars slipping.

Diggs highlighted the remarkable conditions when he attempted to haul in what would have been a remarkable grab and potentially make it a three-point game. However, the 29-year-old slid across the icy turf and slammed into the wall out the back of the endzone.

As he slid into the wall, Diggs took out an unknowing photographer who slammed into the ground in a heap. The three-time Pro Bowler motioned to return to the game beofre turning around to check on the photographer in a heart-warming display of affection.

Diggs momentarily stayed with the photographer and the pair exchanged thumbs-up signs to showcase all was good. Diggs swiftly returned to action, and Buffalo ended up kicking a field goal to make it a one-score game at 17-10.

Diggs and the Bills are hoping to reach another AFC Championship Game, where the Kansas City Chiefs are waiting after their victory over the Jacksonville Jaguars on Saturday night. They were certainly motivated by the presence of safety Damar Hamlin just weeks after he suffered a cardiac arrest on the field in a clash against the Bengals in the regular season.

We’ll be bringing you the very latest updates, pictures and video on this breaking news story.
For the latest news and breaking news visit: express.co.uk/sport/football
Stay up to date with all the big headlines, pictures, analysis, opinion and video on the stories that matter to you.
Follow us on Twitter @dexpress_sport – the official Daily Express & Express.co.uk Twitter account – providing real news in real time.
We’re also on Facebook @dailyexpresssport – offering your must-see news, features, videos and pictures throughout the day to like, comment and share from the Daily Express, Sunday Express and Express.co.uk.

Best of Week 10: Salute to Service uniforms, plus meat art!

Rams come back to beat 49ers, Bengals win in OT