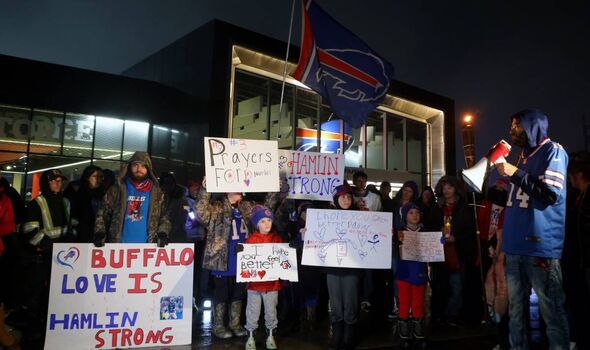 Damar Hamlin is “moving in a positive direction” but remains in intensive care as doctors continue to monitor him amid concerns for his lungs, reports claim. Hamlin, 24, suffered a cardiac arrest on Monday night while playing against the Cincinnati Bengals.

The Buffalo Bills safety is continuing to recover in hospital, having been taken straight to the University of Cincinnati Hospital by paramedics. He was treated on the field by medical professionals, who performed CPR and used a defibrillator to restart his heart.

Hamlin was placed in intensive care and was in a critical condition, where he remains. However, it has now emerged that he had taken a positive turn overnight going into Wednesday, and is now less reliant on the amount of oxygen needed.

Doctors have apparently lowered the level of oxygen he requires from 100% to 50%, in a positive step in his recovery.

Hamlin’s family friend and marketing representative Jordan Rooney claimed Hamlin is “moving in a positive direction” in his recovery. ESPN senior NFL insider Adam Schefter reported on Wednesday that there were still concerns over potential damage to his lungs, such was the force of the hit from Bengals wide receiver Tee Higgins.

Schefter explained: “He remains in hospital, he was there overnight, he continues to go through tests. He remains in critical condition. His uncle said there are concerns about damage to his lungs, that’s what they’re doing tests for now.

“They’re in a critical period now, hoping and praying for signs. Everyone across the NFL is hoping, praying and pulling for Damar Hamlin right now.”

The NFL released a statement on Tuesday confirming there were no plans in place to resume Monday night’s postponed game, and that the final week of regular season games – which will be played this coming weekend – will not be impacted by the suspension of the Bills vs Bengals game.

‘Heartbroken’ over decision to cancel March Madness because of coronavirus concerns

Which NFL teams will play spoiler this season in playoff hunt?