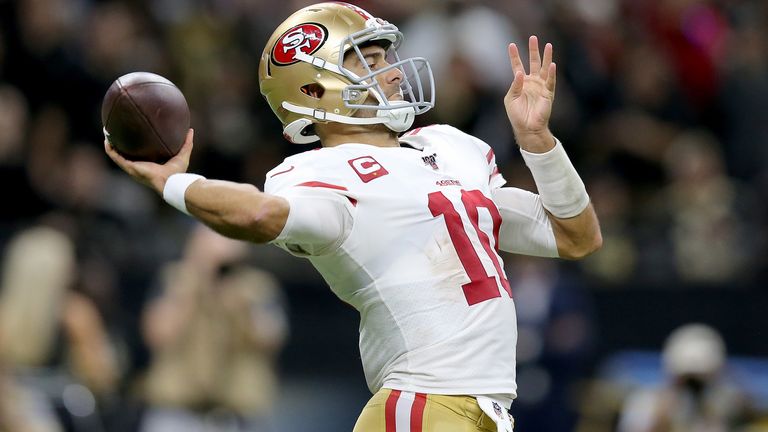 Jimmy Garoppolo went 26 of 35 for 349 yards and four touchdowns to help the 49ers towards their 11th win of the season and a step closer to a playoff berth.

Across from him, Drew Brees was 29 of 40 for 349 yards and five touchdowns, having also run one in himself in the Saints’ third defeat of the year.

The Saints were explosive out of the blocks, with Brees capping a nine-play 73-yard opening drive with a 38-yard touchdown pass to tight end Jared Cook, who had brushed off a weak tackle on his way to the endzone. Garoppolo hit back immediately as he went four from five before connecting with wide receiver Kendrick Bourne for a six-yard touchdown on a third-and-six, with Gould’s extra point levelling things up.

Back-to-back scoring drives then became three in succession when Brees evaded pressure in the pocket from Nick Bosa to roll left and throw deep for Cook, who rose high to haul in a 26-yard touchdown.

It was the 49ers’ No1 defense that came in for high praise in the build-up to the game, but it was the Saints who flexed their expertise first when Demario Davis sacked Garoppolo for a nine-yard loss. San Francisco were eventually forced to punt, from which Deonte Harris produced a 25-yard return to lay the foundations for a five-play drive ending in Brees finding tight end Josh Hill with a three-yard touchdown pass.

A clinic on offense from both sides saw the 49ers strike next courtesy of a 75-yard connection deep in mid-field between Garoppolo and wide receiver Emmanuel Sanders, who had come out on top in his tussle with the Saints’ defensive back.

The Saints again however conjured a response, Brees this time leaping over from one-yard out on a fourth-and-one after the 49ers’ defense had initially done well to frustrate Alvin Kamara on two runs. Sanders was involved again in a thrilling second quarter, collecting the ball on a double reverse and launching deep to running back Raheem Mostert, who ran uncontested into the endzone to reduce the deficit to 21-27 after Gould’s extra point.

Bosa turned up with a huge play of his own shortly after to stop Hill for a six-yard loss on a third-and-one, leading the Saints to punt in a game where defensive stops always threatened to be important.

With half-time approaching, the 49ers took the lead for the first time in the game, taking advantage of Bosa’s previous effort with a 10-yard rushing touchdown from Mostert and a Gould kick to make it 28-27.

A blistering half on offense adopted a more defensive feel after the interval, starting with the first turnover of the game when Garoppolo was intercepted by Craig Robertson after seeing his pass tip off the hands of Sanders. It was time for the 49ers’ defense to live up to its reputation and that it did as the Saints were held to a Wil Lutz field goal.

The Saints fumbled on the first play of their next drive, paving the way for George Kittle to dive to the left pylon for a five-yard touchdown. 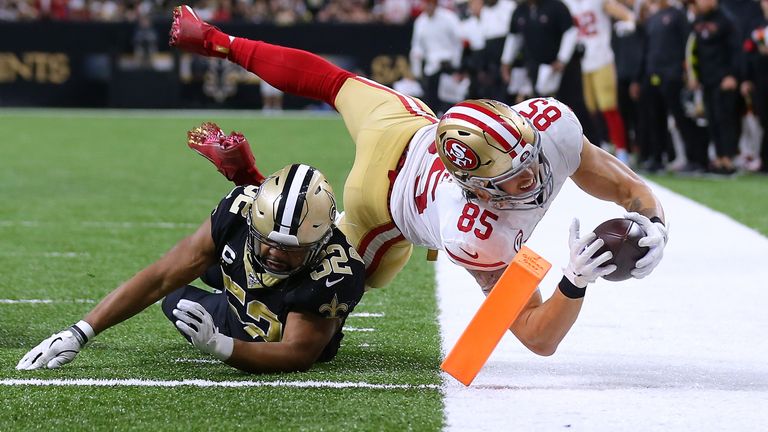 Lutz kicked a 48-yard field goal in response to make it a two-point game at 35-33 after a nine-play drive, before Mario Edwards sacked Garoppolo for a loss of 10 on a subsequent 49ers drive that ended with a punt.

Sean Payton and his side were then aggrieved to have been denied a flag against the 49ers for pass interference when Tarvarius Moore appeared to be holding the intended receiver Tre’Quan Smith on a fake punt. The officials clearly disagreed.

The 49ers extended their advantage midway through the fourth quarter when Garoppolo marked a 14-play 54-yard drive with a six-yard touchdown pass to Bourne in the middle of the endzone after Chauncey Gardner-Johnson had been flagged for unnecessary roughness against fullback Kyle Juszczyk.

In a bid to close the gap, the Saints benefited from a holding penalty against 49ers cornerback Richard Sherman to earn a new set of downs after Brees had been sacked on third down.

Having been found by Brees for a 49-yard pick-up as a result, Michael Thomas then reeled in a 21-yard touchdown to put the Saints within two points at 42-40. A 31-yard gain from Deebo Samuel on the left sideline set up another successful 49ers field goal ahead of the two-minute warning, before cornerback Ahkello Witherspoon squandered a glorious opportunity to pick off Brees.

The 19-year veteran quarterback came back to haunt that missed chance by finding Smith for a 19-yard touchdown after a pass interference call against the 49ers on what had been a third-down incompletion. New Orleans’ two-point conversion try was unsuccessful, giving them a lead of just one.

Kyle Shanahan’s men were in need of a huge moment – so who better than Garoppolo’s No1 target Kittle?

No. 2 Gonzaga men fight off No. 5 Kansas in season opener at Fort Myers tournament