“I want to publicly apologize for my actions this past Sunday,” Haskins tweeted Tuesday. “I spoke with Coach Rivera yesterday and took full accountability for putting the team at risk. It was irresponsible and immature of me and I accept responsibility for my action. I also want to apologize for creating a distraction for my team during our playoff push. I will learn and grow from this and do what’s best for the team moving forward.”

According to the NFL and NFLPA COVID-19 agreement reached before the season, "attending an indoor night club with a crowd of more than 10 people and without wearing a mask" is classified as a high-risk activity. Players who violate high-risk precautions are subject to fines and suspension for conduct detrimental to the club. 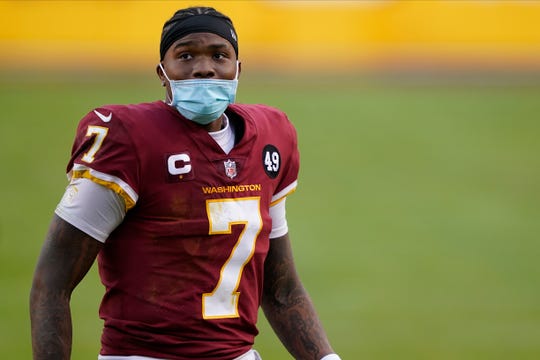 According to The Washington Post, which cited a person with knowledge of the situation, the team has disciplined Haskins, though the nature of the punishment is unclear, and the situation will be handled "internally."

Haskins started Sunday's game against the Seattle Seahawks, a 20-15 Washington loss. The Football Team (6-8) remains in control of first place in the NFC East with two weeks left in the season.

However, their quest for a division title may become more difficult without Haskins. If Smith, who is dealing with a calf strain, cannot play Sunday, and Haskins is unable to suit up due to the league's COVID-19 protocols, the quarterbacking duties will fall to either third-stringer Taylor Heinicke or practice-squad QB Steven Montez.

This isn't the first time Haskins, a second-year player who began the season as Washington's starter, violated COVID-19 protocols. He was fined $4,833 for making a reservation for a family friend at the team hotel last weekend when Washington visited the New York Giants, which is against the rules.

The Falcons had a 99% chance to win vs. Bears and Cowboys, but lost both games