The qualifying round is behind us, and while it provided some surprises with its best-of-five series, the playoffs will take on more of a sense of normalcy Tuesday with the beginning of the first round.

Series will go back to best-of-seven, and teams have had a chance to shake off some of the rust from the 4½ -month coronavirus layoff.

Here are some of the top storylines (and check out the series predictions here):

Trotz led the Capitals to their first Stanley Cup title in 2018, then left that summer in a contract dispute and signed with the New York Islanders.

He predicts "a hell of a series" against his former team.

“That group has a lot of pedigree, they’ve got a lot of firepower and they’ve won championships," he told reporters. "The biggest challenge is to play them even and play them hard, and they’ll do the same because I know a lot about that group.”

“It will be a great matchup for the Washington Capitals and New York Islanders," he said. "It’s not Barry Trotz vs. Todd Reirden. It will be a team effort.” 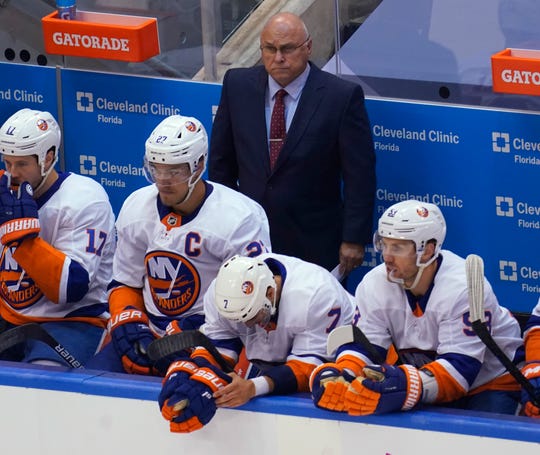 St. Louis Blues and Boston Bruins didn't win a game in qualifying round

St. Louis Blues and Boston Bruins didn't win a game in qualifying round

Both Craig Berube, coach of the defending champion Blues, and Bruins coach Bruce Cassidy thought their teams played better as the round-robin wore on.

But Berube didn't like how his team took too many penalties. The Blues also scored first in every game, only to lose.

“We’re almost trying to win with a one-goal lead," Berube said. "We’re not trying to go out and get the next goal. We’re not playing aggressive enough.”

“It doesn’t matter what seed you are in because you have to beat every team if you want to advance," he said. "We feel good. It’s over now and we start real hockey.”

This is a much different Blue Jackets team than the one that swept the 62-win Lightning in the first round.

Free agents Artemi Panarin, Sergei Bobrovsky and Matt Duchene went elsewhere, but the Blue Jackets made the playoffs despite a host of injuries. That's because of John Tortorella, a coach of the year candidate who made the right moves to knock off the high-flying Toronto Maple Leafs.

Tampa Bay faces trouble because captain Steven Stamkos has yet to play this postseason, and defenseman Victor Hedman was hurt when he stumbled in Saturday's game.

“When your perennial Norris Trophy finalist every year is out, that creates a hole," Lightning coach Jon Cooper said.

Still, Tortorella realizes the tough task ahead, calling the Lightning "a very good hockey club with a lot of weapons."

"We’re going to have to get better in a lot of things, not just defense," he said. "We have to make more plays. We have to get our forecheck better.”