Seven-time world champion Lewis Hamilton says he has no intention of removing his body piercings despite being given just a two-race exemption to resolve the issue.

Hamilton said on Friday that he was prepared to be banned from racing in this weekend’s Miami Grand Prix after governing body the FIA issued a reminder about safety regulations barring jewellery. 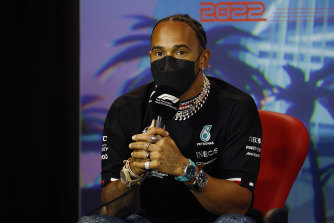 But the FIA avoided a showdown with the Mercedes driver after agreeing to a two-race exemption over his body piercing with Hamilton then expected to be compliant with the rules by the time of the Monaco Grand Prix.

Asked after qualifying on Saturday whether he was satisfied with the resolution of the conflict, Hamilton said he was not and that he had no intention of removing the piercing.

Hamilton had appeared at Friday’s drivers press conference wearing rings on all his finger, heavy neck chains and three watches in an obvious show of defiance.

Asked how he would approach the Monaco race, on May 29th, Hamilton said: “I’ll wear four watches next time.”

Hamilton, who will start in sixth position on the grid in Sunday’s Miami race, suggested that the FIA’s stance was not motivated by safety concerns.

Hamilton has a piercing in his nose and another in a part of his body he has declined to reveal.

Haas driver Kevin Magnussen has also questioned the jewellery crackdown, saying he is not happy at the idea of having to remove his wedding ring.

“I understand what they are they saying, but it is a wedding ring around your finger,” said the Dane.

“With something like that, like your wedding ring, let us take that responsibility. There must be somehow to remove liability,” he said, while adding that he would comply with the regulations to avoid a fine.

Ferrari at the front

In qualifying, Ferrari stormed to the front of the grid for the inaugural Miami Grand Prix. Championship leader Charles Leclerc and his teammate Carlos Sainz locked up the front row.

It’s the first time Ferrari will lead the field to green in the United States since Michael Schumacher won the pole at Indianapolis Motor Speedway in 2006. It’s the first front row this season for Sainz, who has been out-qualified by Leclerc in all five sessions. Leclerc has won three poles this year.

Leclerc turned to the roaring crowd and waved while being interviewed by Danica Patrick, the retired IndyCar and NASCAR driver.

“The fans are crazy. It’s incredible to be here in the US and see how much the support has grown over the last few years,” Leclerc said. “I’ve seen so many people in the grandstands. It definitely motivates us.” 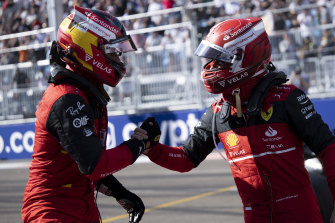 Charles Leclerc and Carlos Sainz will start from first and second on the grid in Miami.Credit:AP

Reigning world champion Max Verstappen led the final qualifying segment until the Dutchman made a rare error and both Ferrari’s surged ahead of him in the final seconds. He’ll start third on Sunday; Leclerc and Verstappen have split the first four races, two wins apiece.

“It’s quite slippery outside of the normal racing line, but we’ll see. A lot of things can happen,” Verstappen said.

Sergio Perez was fourth as Red Bull locked out the second row. Earlier Saturday, Red Bull principal Christian Horner denied a rumor the team plans to sign Fernando Alonso for 2023 and said talks on an extension for Perez would begin during F1’s summer break.

‘FIA should push harder for our safety’

The track around the Hard Rock Stadium is making its race debut and both drivers had argued that an impact-absorbing Tecpro barrier should replace an unforgiving concrete wall at turn 14.

“I’m sorry to be critical, but I told the FIA yesterday that my crash in second gear shouldn’t feel that hard, but today my neck was a bit in pain,” Spaniard Sainz told Sky Sports television.

“I told them ‘let’s put Tecpro there’ because it’s a very hard concrete wall.”

Sainz said he had brought the matter up in Friday’s drivers’ briefing but nothing had changed.

Ocon’s crash cracked his car’s chassis and meant he could not take part in qualifying, although he was cleared to race.

“The impact has been so hard in comparison to what it should have been. We’ve discussed it with Carlos yesterday, with the race directors, to say that we should probably put a Tecpro barrier there and it hasn’t been listened,” he added.

“That is not acceptable, and the FIA should push harder for our safety.”

A spokesman for the governing FIA said the drivers’ concerns had been taken on board and officials inspected the area of impact but decided no changes were necessary from a safety perspective.

“There was damage to the cars but that’s not why we put in Tecpro,” he added.