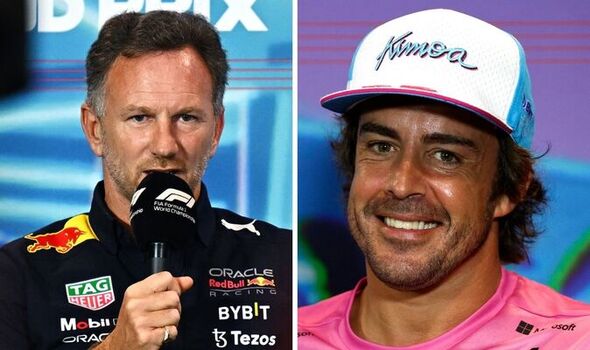 Christian Horner has no plans to try and steal Fernando Alonso from Alpine to team the Spaniard up with Max Verstappen from next season. Red Bull will have a decision to make this year on Sergio Perez’s future with the team.

The Mexican is in the final year of his contract at Red Bull and the team will be hoping he can play his part in the Constructors’ Championship. After Red Bull’s double retirement in the season-opening race in Bahrain, Perez has been consistent with back-to-back second-placed finishes at Melbourne and Imola.

He also out-qualified Verstappen at the Saudi Arabian Grand Prix, but a Safety Car period effectively ruined his race. So far, it appears as though Red Bull are happy with Perez and Horner even admitted the 32-year-old would be handed a new contract as things stand.

“Everybody’s happy with him on the team,” The Red Bull team boss said. “If we had to make a decision today, of course, we would want to extend. As long as he keeps doing what he’s doing, it will be a no-brainer.”

Still, there could be a number of top-quality drivers available at the end of the season with speculation this week that Alonso could leave Alpine. But Horner insists Alonso is not a driver Red Bull will be considering to come in as Verstappen’s team-mate.

“That’s news to me,” Horner said. “He doesn’t fit part of our plans. We’re very happy with our current drivers. “I speak to Flavio, he is a friend, I speak with him every now and again but we are very much focussed on our drivers at this moment in time.

“Checo has been doing a very good job this year.”

Speculation over Alonso’s future has largely been linked with Aston Martin this week. There is no confirmation yet whether Aston Martin will stick with Sebastian Vettel for next season due to their struggles this season.

The four-time world champion has also flirted with retirement with Paul di Resta not sure Vettel has the same desire to continue in the sport.

“He just looks disinterested, I don’t know that’s the impression I get. I’ve known Seb for a long time,” Di Resta said last month. “We were team-mates in 2006 and that’s not the body language when you get the best out of him.”