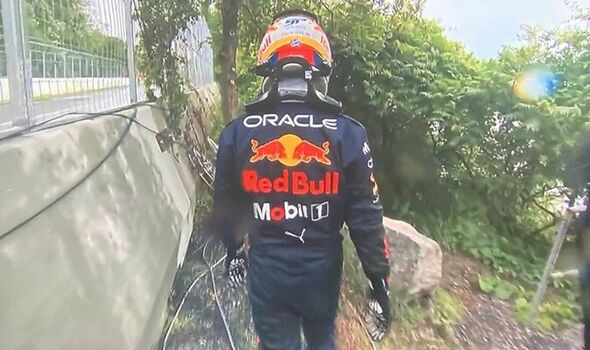 Sergio Perez did well to avoid any creepy crawlies on his long walk back to the pits after crashing in qualifying on Saturday, according to Martin Brundle. Perez’s qualifying ended in Q2 after his wheels locked, sending him crashing into the barrier.

He was unable to reverse the car and the session was red flagged while the stewards cleared the track and repaired the barrier. Once the red flag had been announced, Perez was said to have been offered a scooter back to the pits.

Cameras picked up Perez in constant discussion with the stewards he was walking around with. But he opted against the easy route back to the pits, instead walking alongside the track and through some undergrowth.

And Brundle admitted that he’s taken that same route before where he was told of camera operators being “bitten by spiders”.

“Because we haven’t raced here for a number of years, that undergrowth is greater than normal,” Brundle said. “I’ve been out there when I talk to you [Sky Sports] on Fridays. It’s a long way back.

“He’s lucky he’s got full nomex on because summer, the riggers and cameramen out there have been bitten by spiders. So it’s really the wild west out there.”

David Croft also admitted that he was told there were also “snakes” down in the same area Perez was walking.

That could prove costly for Red Bull in a race where Charles Leclerc will start from the back for incurring grid penalties. But Max Verstappen had been showing good pace throughout free practice and was looking strong to take pole ahead of Carlos Sainz in Q3.

Verstappen remained atop of the timesheet for most of Q3, but Sainz threatened to take it away from him on the final run. Both drivers were neck-and-neck heading into the final sector, but Sainz had a bit of wheel spin coming out of the final corner and was unable to challenge Verstappen.

The surprise of the day came from Fernando Alonso as he split the Red Bull and Ferrari drivers with a terrific final lap.