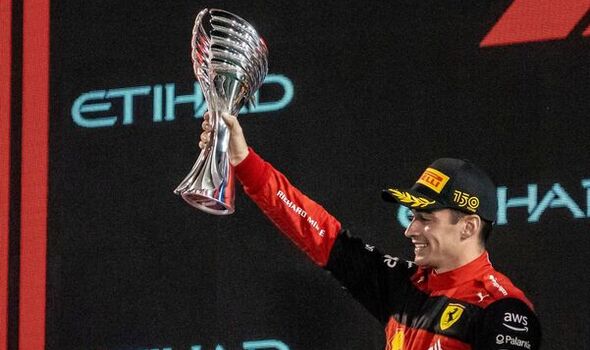 Charles Leclerc has talked about the frustrations of not being able to sustain a world title challenge this season after the Ferrari man secured second place in the standings in Abu Dhabi. Leclerc finished runner up behind Max Verstappen at the Yas Marina, but crucially, in front of Sergio Perez having gone into the race level on points with the Red Bull man.

But ending up 146 points behind overall champion Verstappen would have seemed inconceivable after three races of the campaign. Leclerc was first past the chequered flag in the season opener in Bahrain, and then after finishing second in Saudi Arabia again triumphed in Australia to open up a 46 point lead over the Dutchman.

However, the Monegasque man would only win one more race over the course of the season, in Austria in July. And his campaign was seemingly plagued by a series of poor strategy calls from the Scuderia, which has led to speculation over the future of Team Principal Mattia Binotto.

Addressing the media after the race in Abu Dhabi, Leclerc did note the improvement on 2021, where he finished seventh overall on just 159 points. But despite labelling his performance “an amazing step forward,” he also acknowledged how his title challenge had derailed.

“But obviously I cannot ignore our middle part of the season that has been super-frustrating,” he said. “We went from leading the Championship with quite a bit of points to being behind by quite a bit of points. And that was a frustrating part of the of the season. So yeah, all in all, we just need to take all the mistakes that we’ve done this year and try to improve for next year.”

On the perceived tactical blunders that cost his team dear, Leclerc did argue things had improved in the latter stage of the season: “I think we really did some step forwards in terms of strategy and the way we have been taking decisions recently, in the last few races,” he added.

“Unfortunately, it was a bit more difficult to show it because the pace is not as good as the beginning of the season. But I’m confident that in terms of pace, we will manage to catch Red Bull back next year.”

George Russell: Lewis Hamilton may have to call Mercedes bluff in contract negotiations