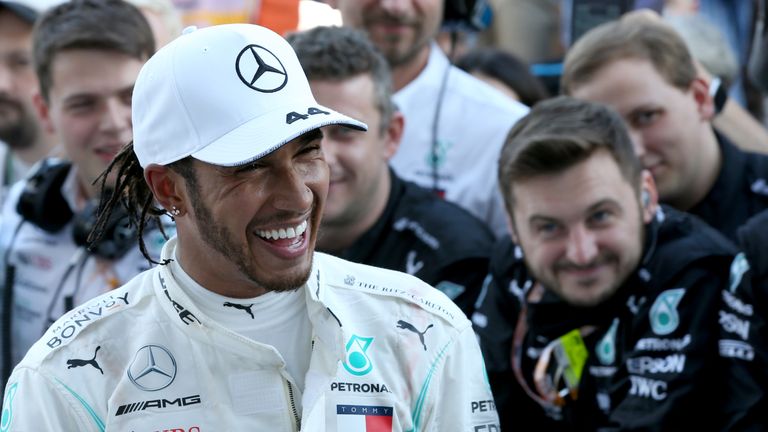 Lewis Hamilton is fast closing in on a sixth Formula 1 world title but how soon before the end of the season can he clinch the crown?

The Mercedes driver’s ninth victory of the year in Russia moved him 73 points clear of Mercedes team-mate Valtteri Bottas and 107 points ahead of next-nearest challenger Charles Leclerc.

There are 130 points to play for with five races left.

Hamilton cannot clinch the title at this weekend’s Japanese GP – but he can knock all drivers bar Bottas out of mathematical contention.

With 104 points still on offer in the four races after Japan, Leclerc will need to outscore Hamilton by four points and Max Verstappen will need to take seven points out of the Englishman, while Sebastian Vettel requires a 25-point swing in Sunday’s race, which begins at 6.10am on Sky Sports F1.

But Bottas would still be in the hunt even if he retired and Hamilton took the maximum 26 points for win and fastest lap.

With six more wins than any other driver in 2019, Hamilton is already guaranteed to win on countback were he to end the season tied on points with anyone.

To become champion at the Mexican GP on October 27, Hamilton needs to finish that weekend 78 points clear of his nearest challenger.

So that means he must increase his current 73-point advantage by five points or more over the course of Japan and Mexico. Seventy-eight points would be enough after Mexico to do it because as, as mentioned, he wins any tie-breaker.

But Constructors’ could be settled in Japan…

Mercedes’ unexpected one-two last time out in Sochi has opened up the possibility for them to clinch a record-equalling sixth successive Constructors’ Championship as soon as this Sunday at Suzuka.

The Brackley team lead Ferrari by 162 points with a maximum of 220 left to play for.

With only 176 left after Suzuka, Mercedes must therefore increase their advantage over the Scuderia by 14 points this weekend to become champions once again, with four races to spare.