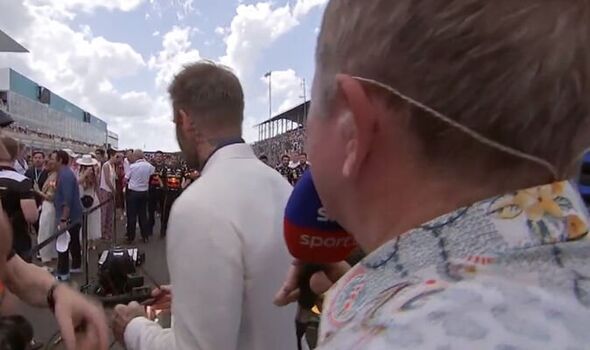 David Beckham blanked Martin Brundle during the F1 host’s chaotic grid walk ahead of the Miami Grand Prix. Brundle attempted to grab the ex-England international for a quick word but Beckham walked away after his name was called.

“That’s the second time he’s blanked me,” Brundle said. “I didn’t get a free-kick in that one.”

Beckham did return after taking a look at a Red Bull, which was parked static on the grid. Brundle asked the 47-year-old about Miami hosting it’s first ever F1 Grand Prix.

“It’s amazing, it’s what Miami does best,” Beckham replied. “It’s a sporting town and an entertainment town. I think today is incredible and it’s going to be amazing.”

When pressed on who he thought would win the race, the former Manchester United midfielder said: “We will see.”

Beckham resides in Miami and owns local MLS football team Inter Miami, which is managed by Phil Neville. And he attended the race as a guest of Red Bull. But Beckham was not the only celebrity to snub Sky Sports’ presenter.

Serena Williams also waltzed down the grid lane and was in no mood to convey her thoughts, while a number of others followed suit.

Piers Morgan reacted to the iconic grid walk tweeting: “Martin Brundle’s F1 grid walk in Miami, where he doesn’t know who anyone is, is incredibly awkward and hysterically funny.”

**We’ll be bringing you the very latest updates, pictures, and video on this breaking news story.

For the latest news and breaking news visit:/sport