Max Verstappen was spotted talking to George Russell about Lewis Hamilton’s double overtake at the Italian Grand Prix. Hamilton slipped past Lando Norris and Pierre Gasly for seventh after stopping for new softs.

The seven-time champion  swung back on the exit of turn two to launch himself past on lap 36. Verstappen seemed impressed at the move, giggling as he watched his former title rival pass the McLaren and Alpha Tauri.

Verstappen then said: “Haha double overtake” as he watched the screen with Russell and Charles Leclerc in the cool down room moments after the chequered flag. Hamilton managed to fight back to P5 after starting the race 19th on the grid.

The Briton was forced to start at the abc of the grid after taking on new engine components ahead of the weekend. But, it means Hamilton has lost more points to Russell in the battle at Mercedes. 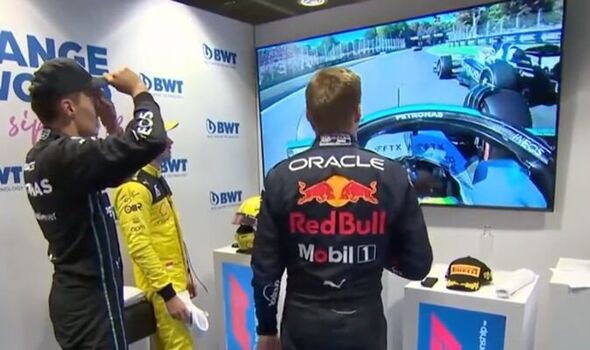 Russell secured his fourth podium in five races as he held onto P3 despite pressure from Carlos Sainz. It allows Russell to open up an extra five point advantage over Hamilton with the gap now at 35 points.

Hamilton admitted he was “grateful” at securing a top-five finish after a late safety car put his result at risk. The race eventually ended behind the safety car after marshals were unable to clear away Daniel Ricciardo’s McLaren in time.

He explained: “It was a good race. The guys were saying that anything between sixth and fourth was possible and that felt a stretch for me. But I had fun. I struggled at the beginning, but I’m, really really grateful that I made my way through and got those points.

F1 2019 team-mate head-to-heads: What are the latest scores?