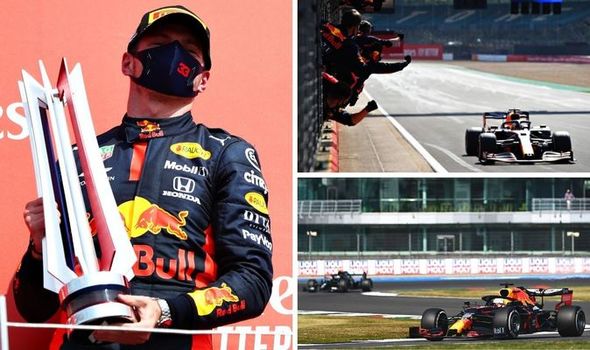 Max Verstappen reaped the rewards of taking matters into his own hands as he won Sunday’s 70th Anniversary Grand Prix. The Red Bull driver fended off Mercedes’ Lewis Hamilton and Valtteri Bottas to take victory from fourth on the grid at Silverstone.

Verstappen ignored team orders during the first stint to keep piling the pressure on then-leader Bottas and second-place Hamilton.

“Mate – this is the only chance of being close to the Mercedes,” said Verstappen on team radio. “I’m not just sitting behind like a grandma!”

The Dutchman’s decision paid dividends as he forced the duo to pit sooner than planned and made the most of Red Bull’s strategy, which had seen him start the race on hard tyres.

The win is Verstappen’s first of the season and he said he knew he had to take the chance as soon as he had a sniff of victory.

“We so far didn’t really have an opportunity in all the races to push them and I could see where we were pushing them,” said Verstappen. “So I tried to put the pressure on. They had to pit. From there on I could do my own pace and basically build that advantage to the end.”

Verstappen admitted his own surprise at the win, which is Red Bull’s first at Silverstone since Mark Webber triumphed there in 2012.

“I didn’t see it coming, but after the first stint it seemed like we were really good on tyres,” said Verstappen. “Of course then it’s a question mark of how the Mercedes are going to go on that hard tyre.

“We had a lot of pace in the car. I didn’t really have a lot of tyre issues at all. We just kept pushing. An incredible result to win here and we had a great day.

‘This is war’: Ferrari battlelines drawn