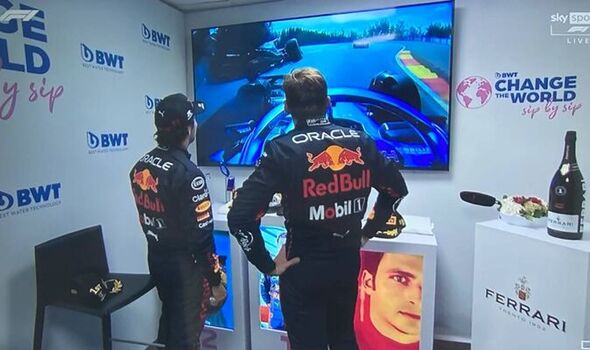 Max Verstappen and Sergio Perez were caught on camera watching a replay of Lewis Hamilton’s crash with Fernando Alonso in the cooldown room and the Dutchman gave his thoughts to his team-mate. Verstappen started 14th on the grid and avoided some of the mayhem ahead of him to eventually take his ninth win of the season and arguably the easiest of his career.

Part of the chaos ahead of him on lap one was caused by the coming together of Hamilton and Alonso heading into the chicane. Hamilton tried to overtake his former team-mate on the outside, but Alonso was unwilling to give up the place with the two coming together and the Brit flying into the air.

The seven-time world champion crashed down hard to the ground and tried continuing in the race, but he was soon ordered to pull over after too much damage was done to his car. Perez had a birds-eye view of the crash on the track when he was battling with George Russell into the same corner, and almost collided with Alonso on the exit of the chicane.

But Verstappen was seeing the incident for the first time after his race win when replays of the crash were shown in the cooldown room. Perez and Verstappen stood there glued to the screen as on-board footage from both Alonso and Hamilton was shown. 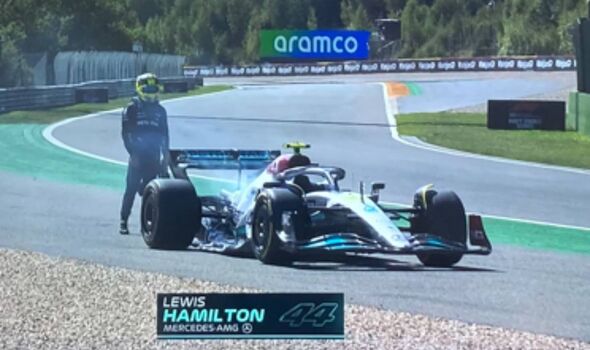 When Hamilton’s on-board footage was shown, it made clear just how hard Hamilton came back down to the ground after being flung into the air. “That’s a big hit,” Verstappen could be heard saying to Perez.

Carlos Sainz then entered the room where the championship rivals began talking about their respective races. Verstappen pointed out that the tyre degradation was bad around the Spa track, to which Sainz replied: “For you no.”

Verstappen than jokingly responded: “A little bit less than you.”

The laughs and jokes shared in the cooldown room will be a far cry from the mood inside Mercedes’ garage. Promising results in both France and Hungary before the summer break hinted that Hamilton and George Russell would be back and closing the gap even more to the championship leaders.

But the Belgian Grand Prix has seen them take another step back with Hamilton calling out the troublesome W13 on Saturday. However, Hamilton took full responsibility for his role in the crash with Alonso.