Max Verstappen won a helter-skelter German Grand Prix after Lewis Hamilton crashed off while leading – the world champion was dealt blow after blow all day.

The rain fell steadily on the track for most of the afternoon, but nothing else was steady. It was bonkers. Aquaplaning, strategy blunders, pit-stop botches. Comedy and upset abounded.

For Verstappen, when all the carnage was over, it was his second win of the season and another validation of his abilities in the wet, that true test of the best. 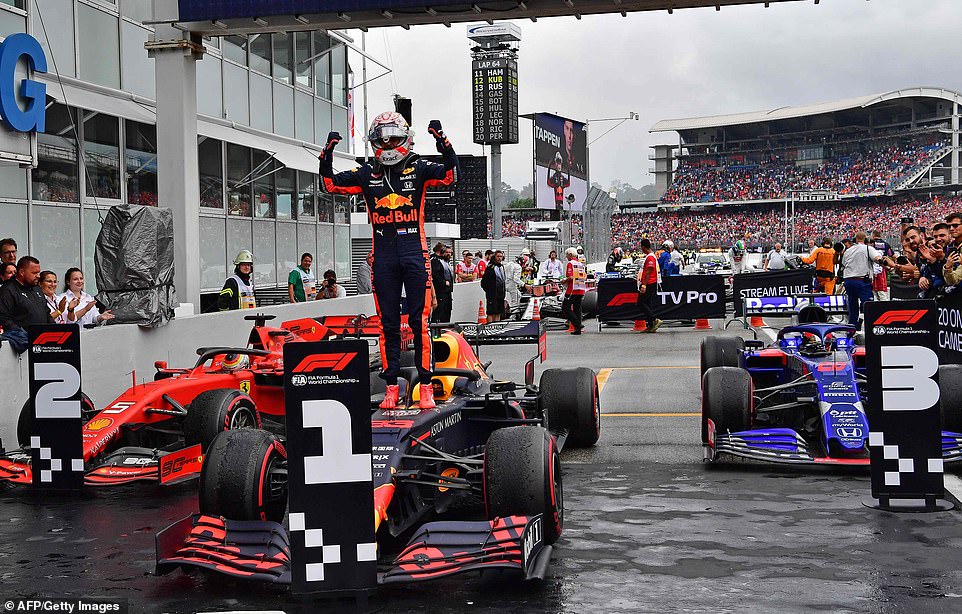 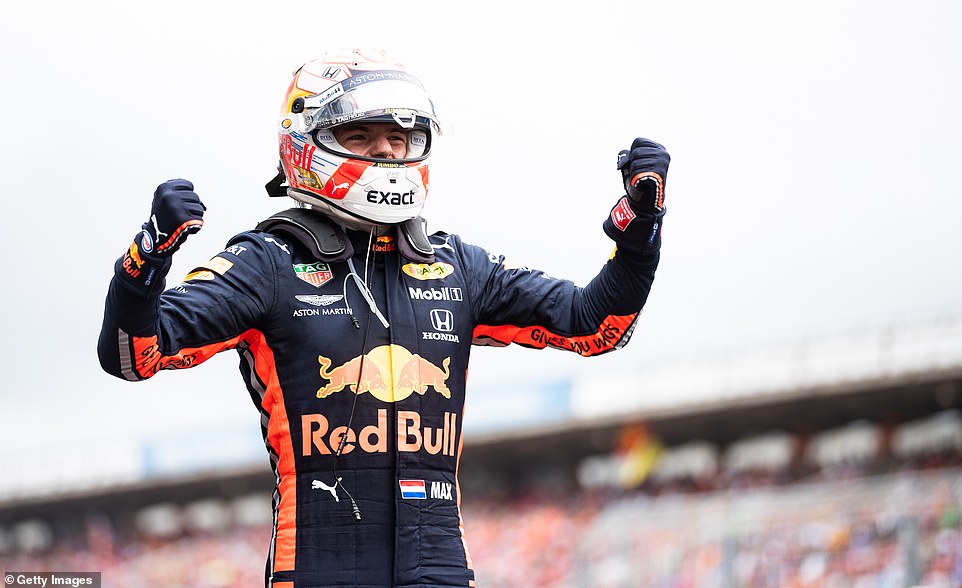 The Dutchman held firm as all those around him collapsed including Charles Leclerc, Valtteri Bottas and Lewis Hamilton 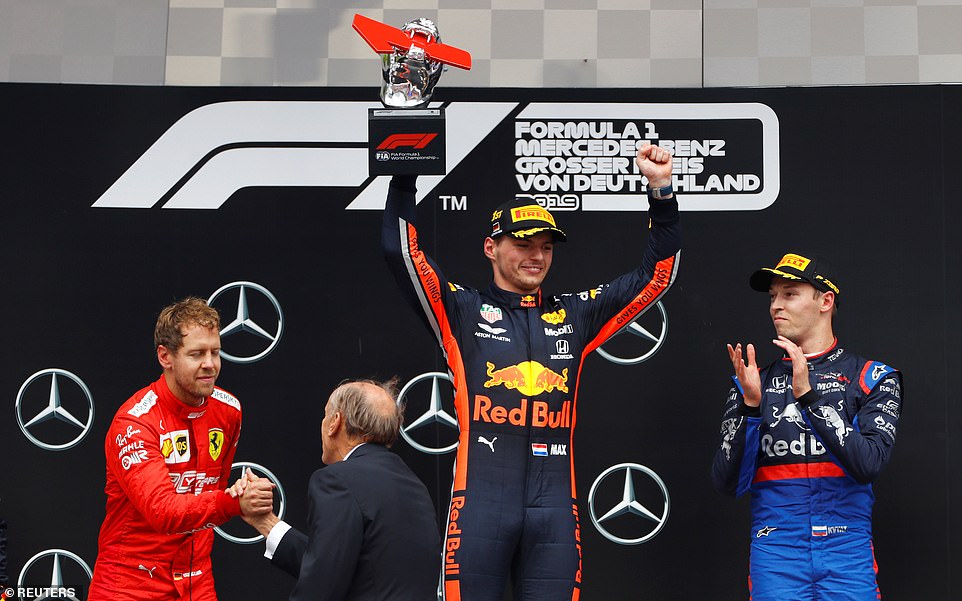 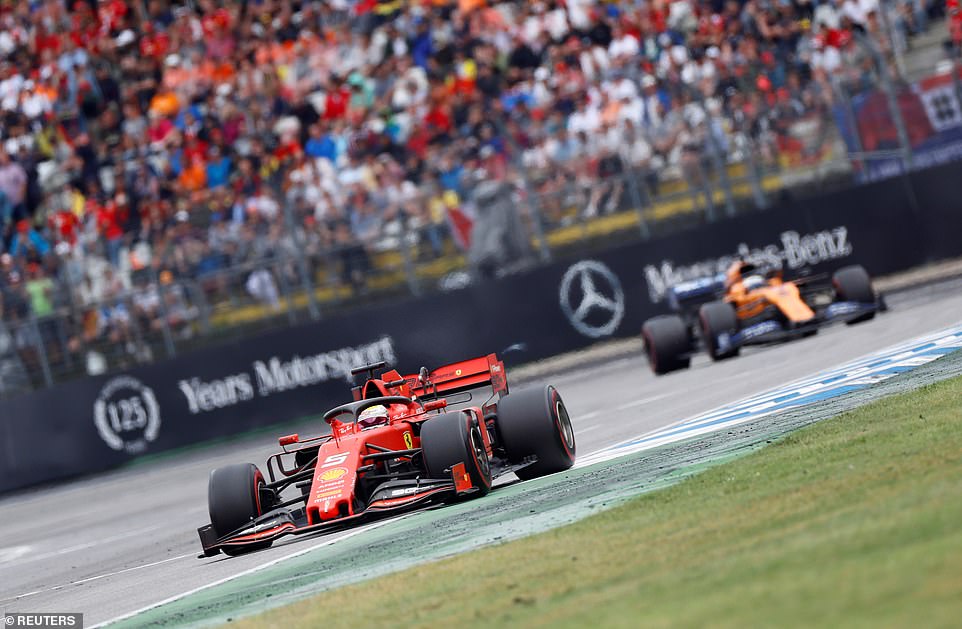 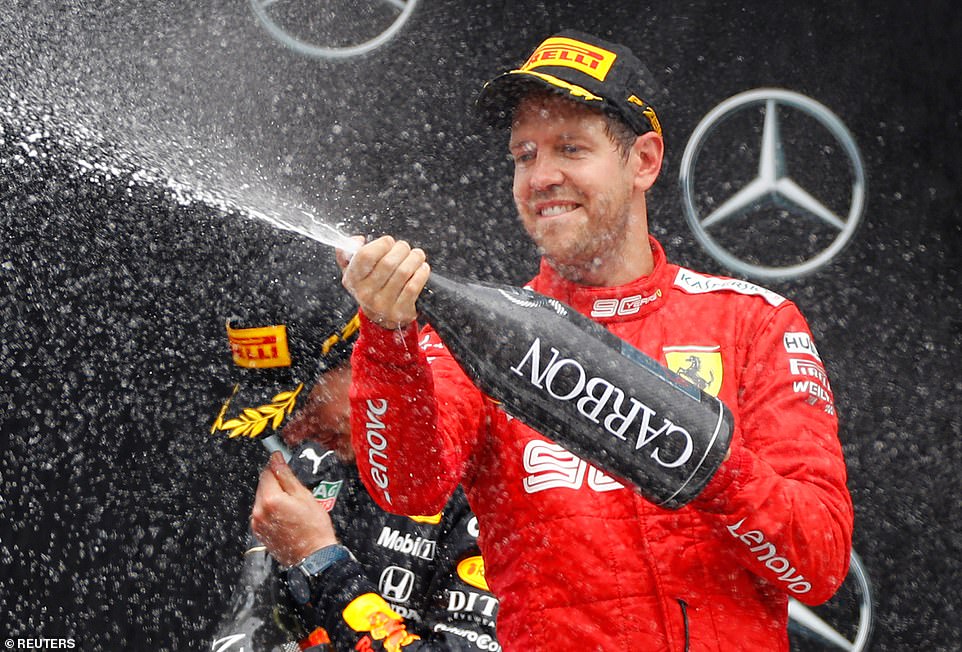 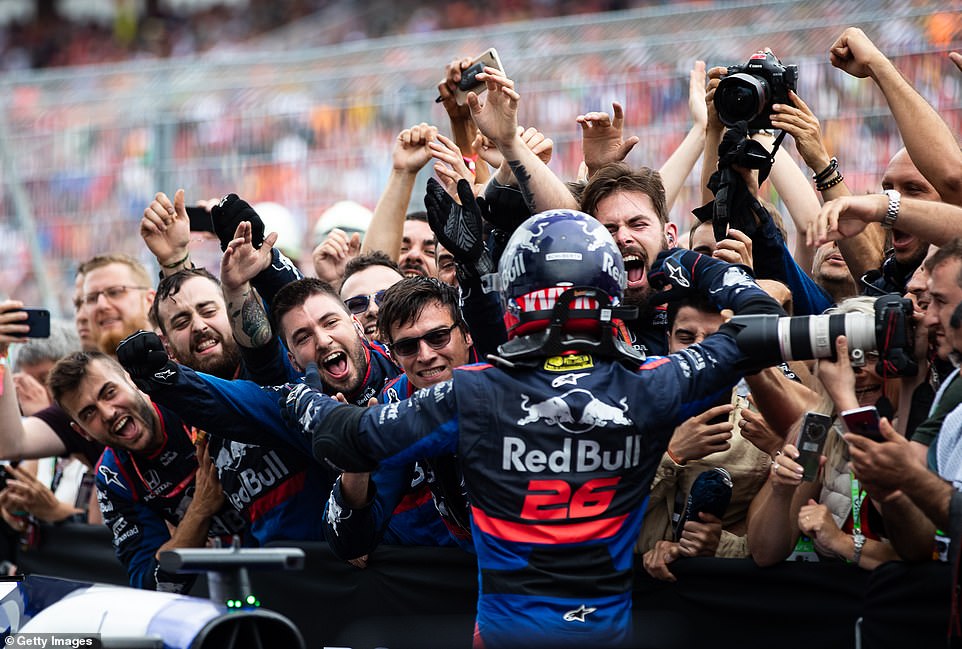 Amid the chaos on track, Daniil Kvyat of Toro Rosso managed to hold to record an unlikely third-placed finish and podium 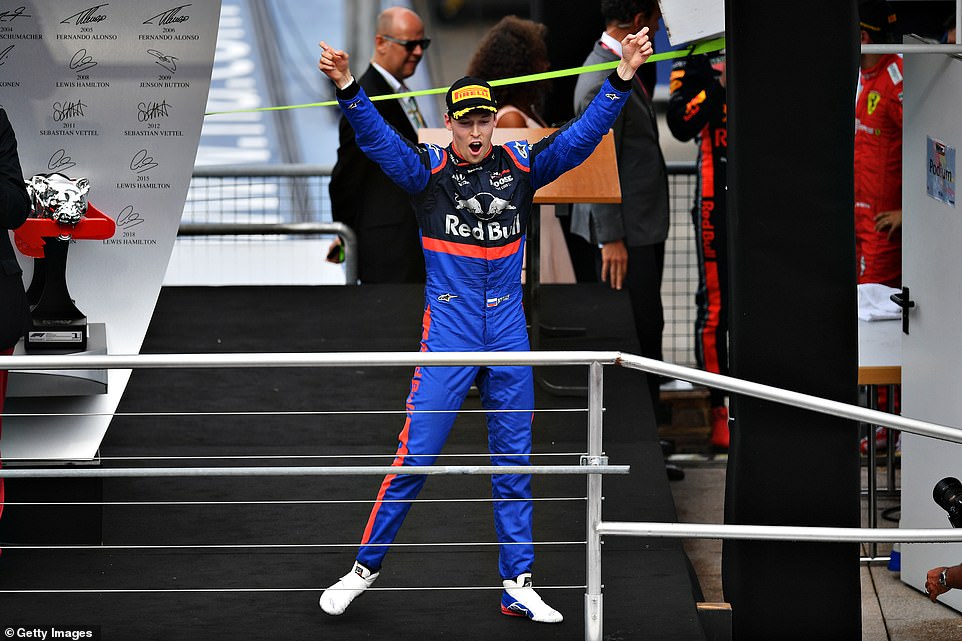 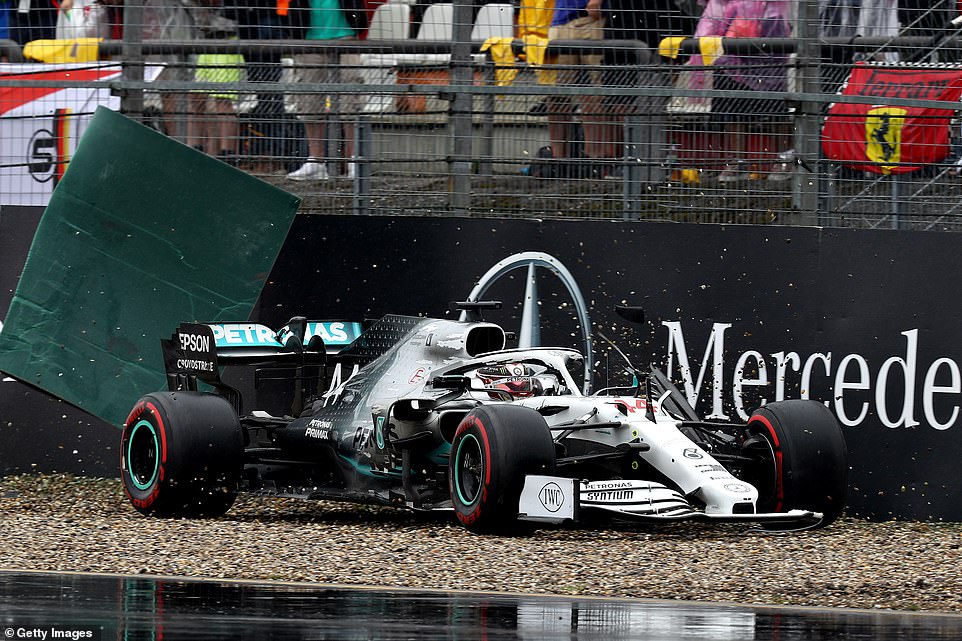 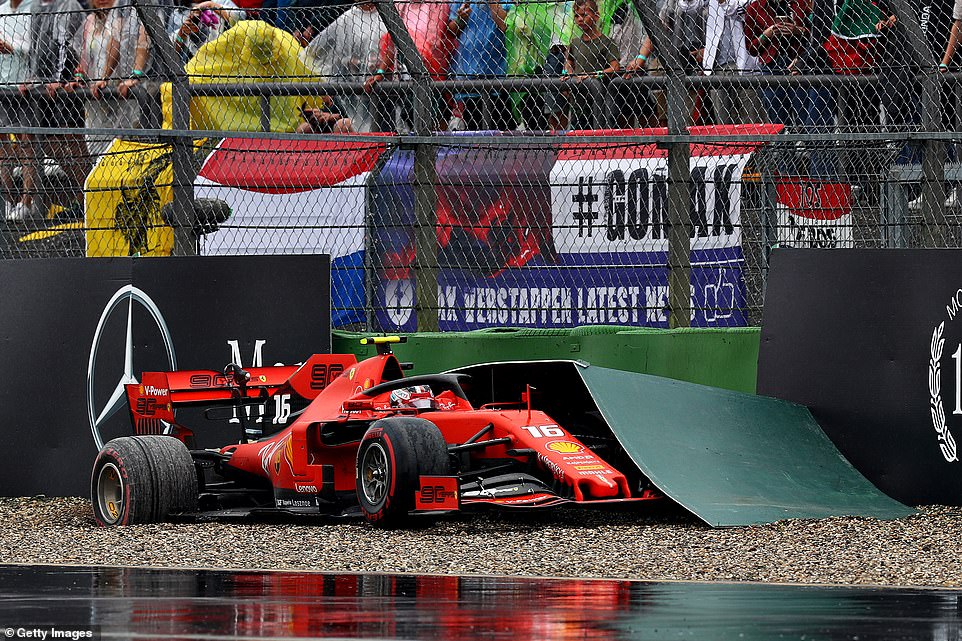 While Hamilton recovered, just a lap beforehand Charles Leclerc crashed in the exact same spot which ended his race 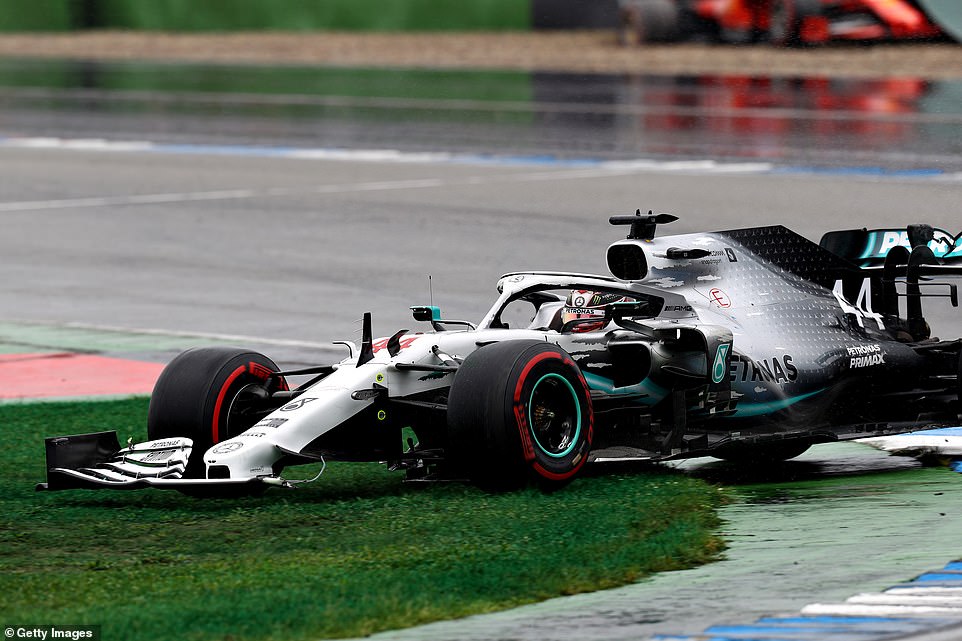 Hamilton lost part of his front wing and illegally entered the pit lane immediately, which led to a five-second time penalty 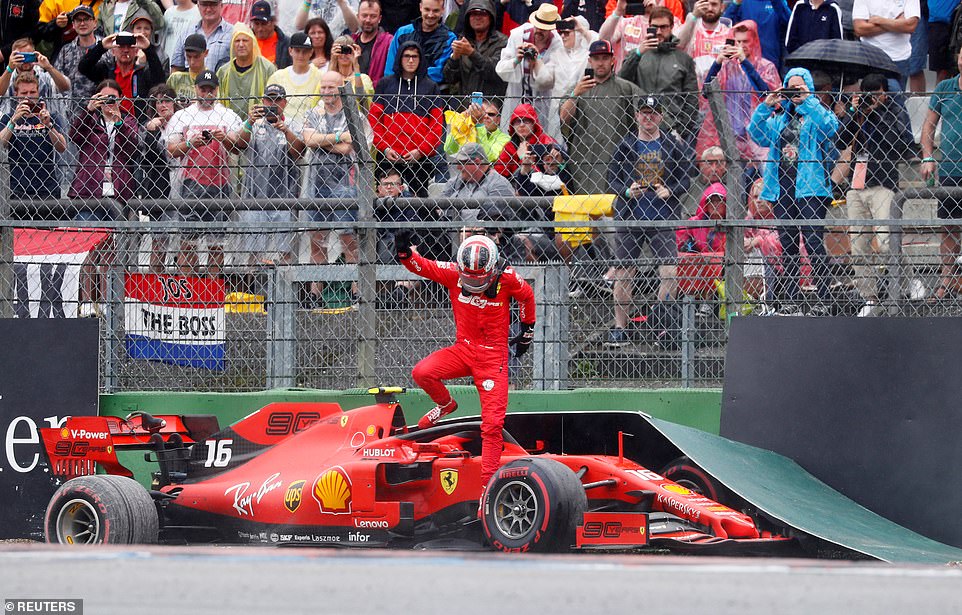 Hamilton, who finished 11th, had looked on course for most of the first half of the race to win from pole but his own errors and those of his team cost him that early near-certainty.

He suffered the ignominy of running last.

This is what rain does to Formula One. It turns the tables until the feet are pointing to the sky.

The pivotal moment came on lap 29, when Hamilton ran wide at the final corner, the wettest point. By this time he had been shod on slick tyres – like the rest – but it was an error to have done so. The teams had been seduced into thinking that the track was dry enough. No, it wasn’t; it was a curate’s egg and that last sector had perdition written all over it even if other swathes of asphalt were becalmed.

Hamilton returned for wet tyres and a replacement for the front wing he had damaged. What a shambles unfolded there. First, Hamilton went the wrong side of the bollards into the pits. He was handed a five-second penalty for the misdemeanour. Then, the stop of stops from the usually slick Mercedes boys. 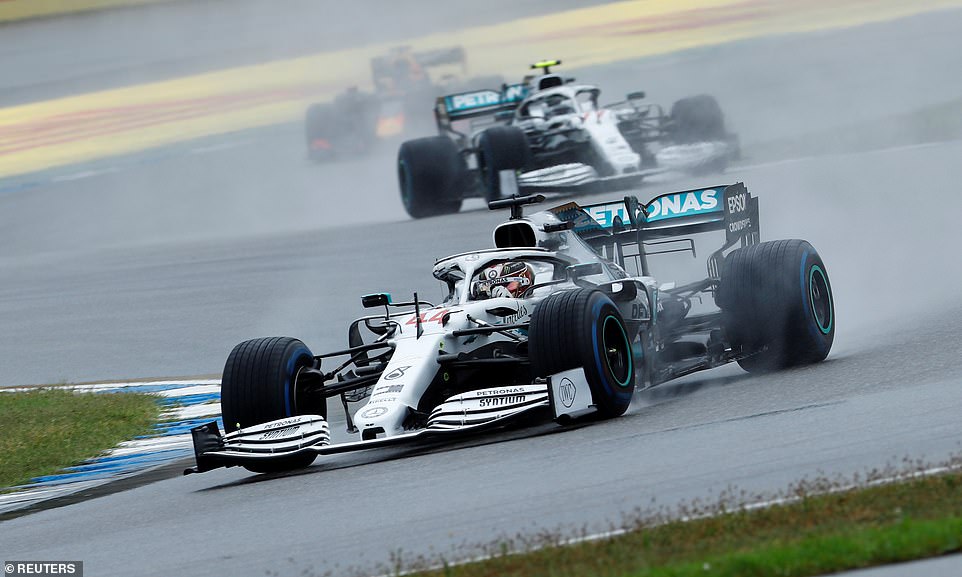 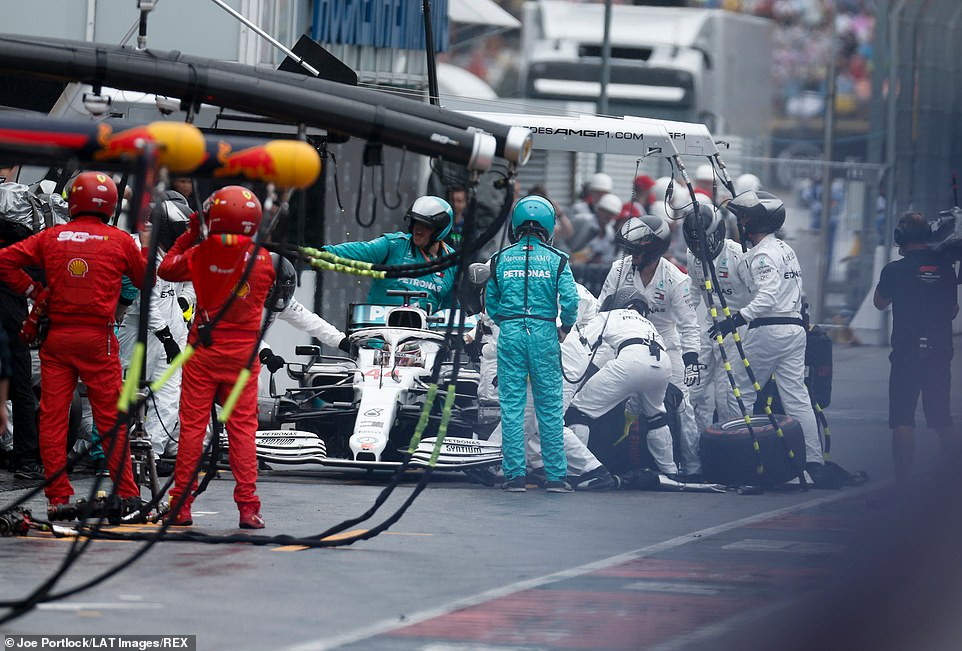 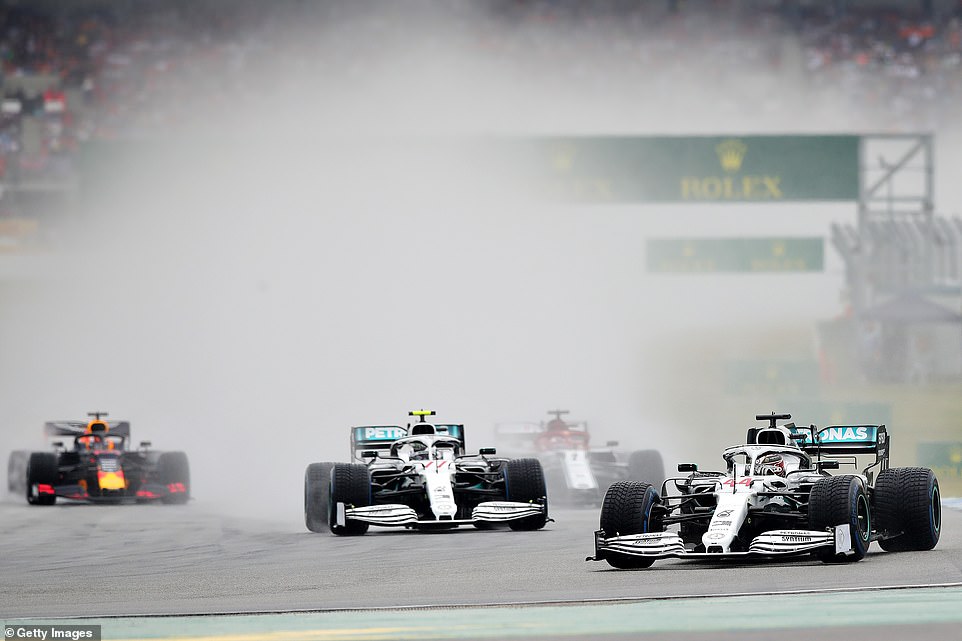 Lewis Hamilton led the charge and had a brilliant start at Hockenheim, opening up a 1.5 second lead over Valtteri Bottas 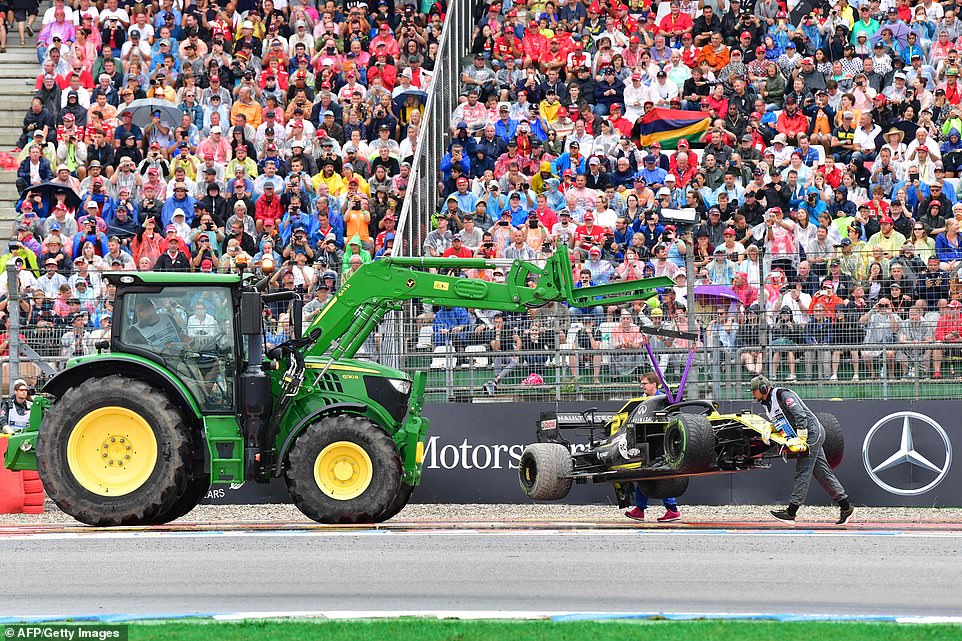 Laurel and Hardy like, they were not ready. Tyres were ferried in and out. One bloke appeared to hurt his back in the melee of desperation. Frantic hand signals were made. The semaphore only confused the issue more. Hamilton was stuck there for 50 seconds. The crowd, many in orange and supporting Verstappen, hollered in delight. Embarrassment for Mercedes on their home turf.

Hamilton emerged fifth and still in with a chance. He then pitted a lap late under the third safety car of the race, called out for Nico Hulkenburg’s crashed Renault, and was struggling in midfield when a massive cheer went up. The crowd had seen Hamilton tumble off again. It was now that he was back in last place.

‘How’s it got this bad?’ asked Hamilton just before his final error. ‘Copy Lewis. It’s something we are going to review.’ 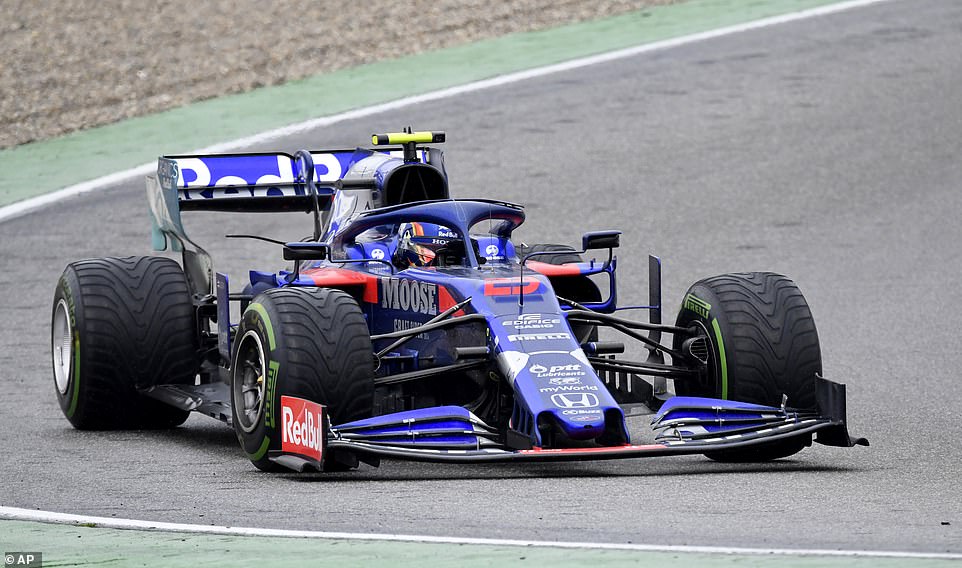 Kvyatt’s podium was accompanied by the a brilliant drive from Alexander Albon, who also finished in a points position 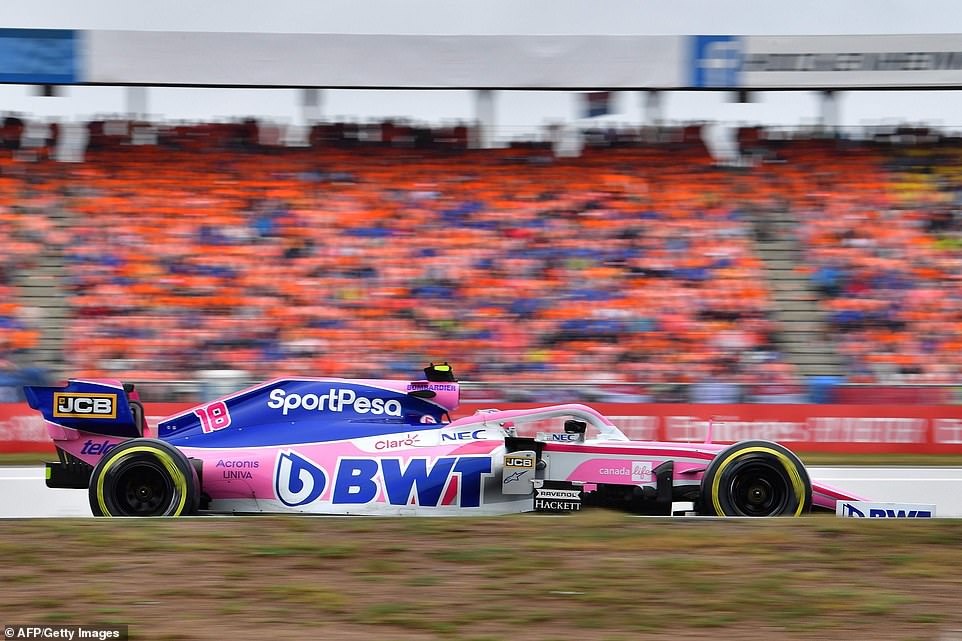 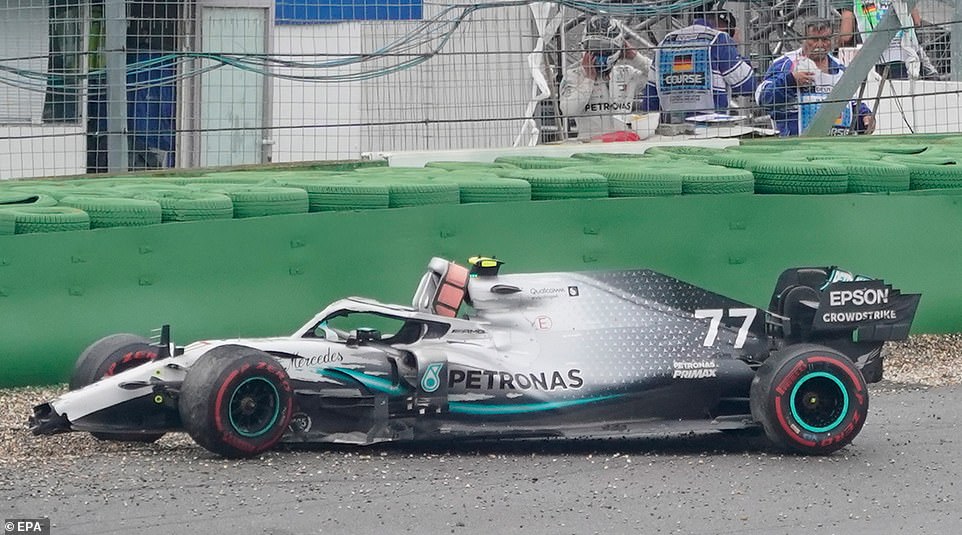 Valtteri Bottas was pushing to chase down Stroll, who was in a podium spot, when he then joined the retirement club 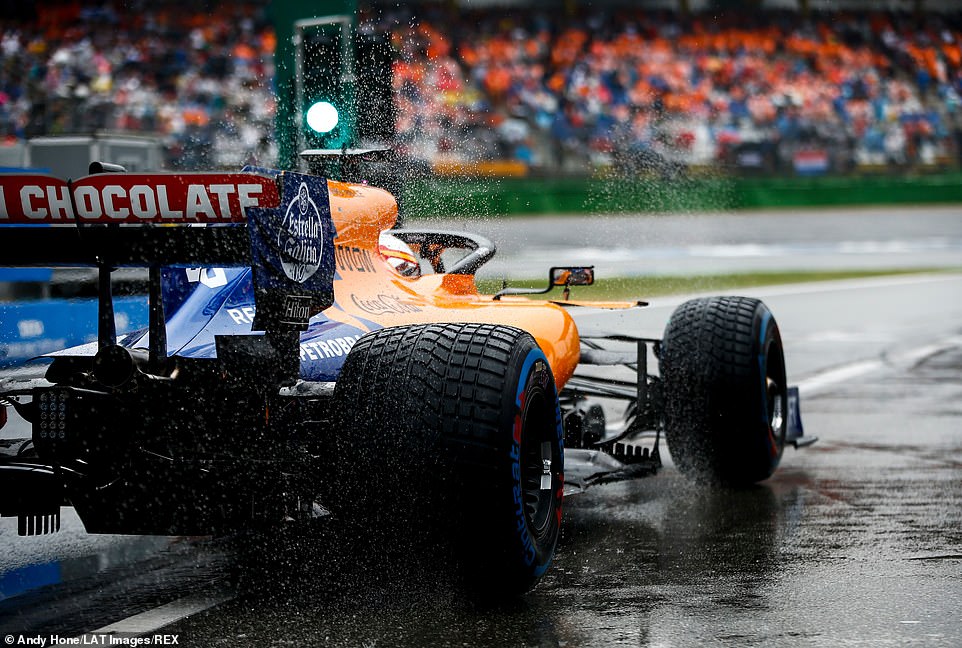 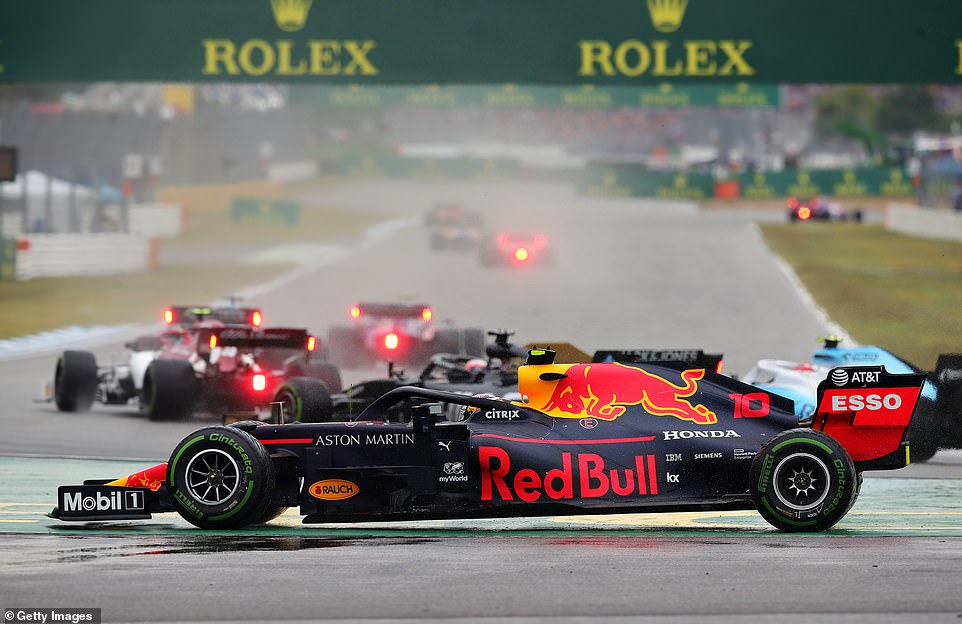 What else? Charles Leclerc had a chance of winning the race for Ferrari but he too spun off. That first race win is proving elusive.

Sebastian Vettel, anonymous all afternoon, crept through the rivulets to finish second having started from last on the grid, a reward for perseverance rather than bravura. It was a tonic for his knocked confidence. Daniil Kvyat was third for Toro Rosso. What were the odds on that?