Valtteri Bottas’ tough start to the 2021 season is ramping up the pressure on the Finn, with sources within the Mercedes team reportedly suggesting that the Finn may not have the full confidence of those at the factory.

A report from the Daily Mail quotes an unnamed Mercedes source, who claimed that Bottas is “not up to it,” and highlighted the superb job done by Williams driver George Russell during his substitute appearance for the team in Bahrain last season.

Bottas has claimed two podium finishes so far this season, with his two third place finishes sandwiching a DNF at Imola.

It means that the Finn currently sits fourth in the World Drivers’ Championship standings on 32 points.

Significantly, he sits a whopping 37 points adrift of team-mate and championship leader Lewis Hamilton, and 29 points behind Red Bull’s Max Verstappen. McLaren driver Lando Norris is also ahead of Bottas in the standings, on 37 points.

Bottas was perfectly placed to bounce back in Portimao last weekend after claiming pole position after a superb qualifying session. 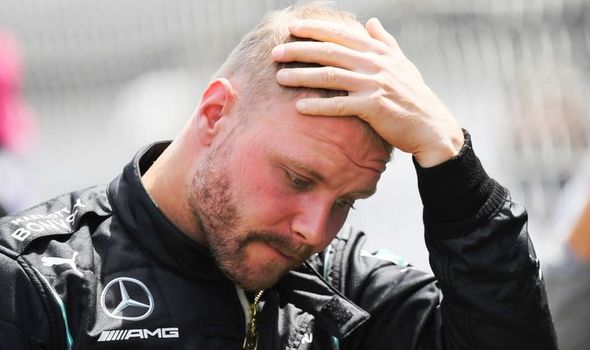 But the Finn was unable to capitalise on race day as he fell behind Verstappen and Hamilton early on, then struggled to keep pace with the two front runners as he finished third.

There was a silver lining to Bottas’ weekend, after Verstappen’s track limits sanction seeing the Red Bull man’s fastest lap wiped out, gifting Bottas the additional championship point for the quickest lap of the race.

But with the gap between Bottas and Hamilton widening to a chasm and, more worryingly for Mercedes, the Finn seemingly unable to consistently challenge Verstappen for pace over a full race distance, questions are being asked about the Finn’s role within the team.

A Mercedes source told the Mail, “There is some unrest at the factory about Valtteri.

“He is not up to it, which was made clearer by the job we saw Russell do in Bahrain.”

Tensions between Bottas and Russell boiled over in Imola when the pair collided during the race, ending both men’s hopes of success at the Italian circuit.

Russell is considered by many to be the heir-apparent at Mercedes, with the Williams racer, a member of Mercedes’ young driver programme, thought to be the natural replacement for Bottas in the future.

But Mercedes boss Toto Wolff remained tight-lipped on his plans for his 2022 driver lineup when speaking at Portimao, simply saying that he hadn’t come to a final decision yet.

“I hope one day I wake up and it becomes clear,” he said.

“I think we need to look into the season, how the next races unfold, and then it is a judgment call, I believe. Not a very scientific response, but I haven’t got any at the moment.”