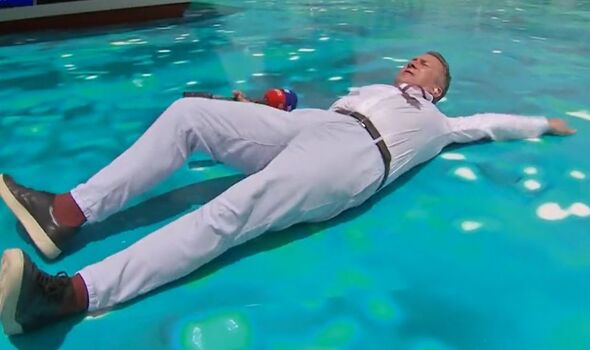 Organisers of the Miami Grand Prix have confirmed major changes to the venue after its debut appearance last year. In 2022, the inaugural event near the Hard Rock Stadium proved a huge success, with a host of celebrities among the 243,000 fans who attended the weekend, with Red Bull driver Max Verstappen taking the chequered flag.

But the stunning scenery that accompanied the track, with blue water lakes and luxury boats seemingly in view as the cars completed their laps, may have proved misleading. And the notion was blown wide open by Sky Sports F1 reporter Craig Slater, as he paraded the circuit days before the race.

In live footage, Slater seemed set to wow fans by jumping two footed into the water, only to land on coloured concrete. The journalist then jokingly swam on the floor before the Sky Sports Twitter account posted the footage with the amusing caption of: “Nothing to see here, just Craig Slater having a swim at the Miami Grand Prix’s fake harbour.”

There’s been no mention of real water for the next version from May 5th-7th next year, but organisers have confirmed a new Paddock Club and Team Village has been built. The whole track is also set to be resurfaced in order to increase grip levels and promote better racing.

In a released statement, South Florida Motorsports (SFM) said: “The new three-tiered Paddock Club structure has been built above the existing team pit garages and overlooks the pitlane and start/finish straight. There are also additional hospitality experiences at Miami International Autodrome for 2023 which include new spaces The Vista at Turn 1 and The Boathouse at MIA Marina.”

The Miami Dolphins football field will also be utilised in order to expand the hospitality and team village, while track designers TILKE will oversee a repaving of the entire 3.36-mile race track. SFM have said the improvements should lead to more overtaking in South Florida’s second Grand Prix race.

Event President Tyler Epp added: “After an incredible debut race, we have been working flat-out to ensure the 2023 event is an even greater experience for everyone visiting the Miami International Autodrome. Stephen Ross and Tom Garfinkel are committed to making May’s event a best-in-class experience that is unlike any other Formula 1 race in the world.”

Miami will be one of three US venues used by F1 next year, with Austin in Texas being retained, whilst the night race in Las Vegas will make its debut. Overall, the season will contain a record breaking 23 race events.