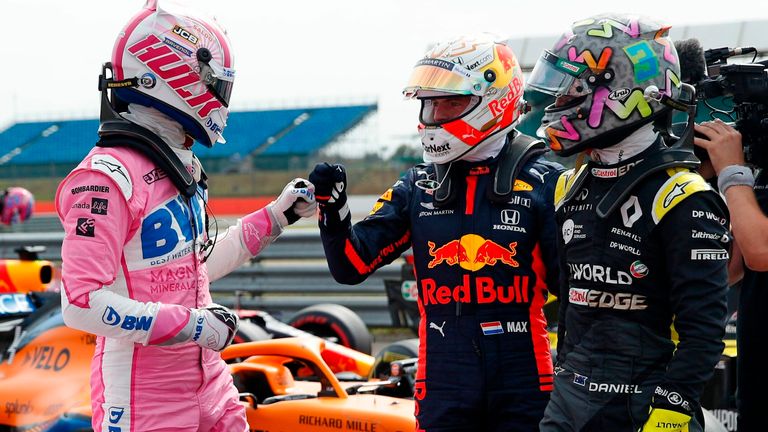 Arriving at Silverstone last Thursday morning was eerie. There had been no traffic on the way in, there were no fans at the gate and the air wasn’t full of the usual buzz of excitement that surrounds every Grand Prix there.

The marshals and security, though, were their usual cheerful selves and it was a welcome sense of deja vu saying hello on the way in and waving at every person on the drive round to our TV compound near the Wing.

I was due to interview Nico Hulkenberg at midday but it was cancelled shortly after I arrived. That’s when the speculation began as to whether Sergio Perez had tested negative for Covid-19 and would be allowed back into the paddock.

There was a lot of confusion about his isolation period following his positive test the week before. He took the test that returned a positive result on the Wednesday, but the result of the test wasn’t announced until the Thursday. As he was in England, he had to abide by Public Health England policy on isolation. That policy on the day he took the test was seven days isolation if you tested positive.

However, that then changed on Thursday, so had he taken a test just 24 hours later he would have had to isolate for 10 days. As it turned out, he tested positive again.

With Ted away on holiday this weekend, I was down to do all the driver interviews on the Thursday afternoon. The new routine this season sees every driver on the grid go to the interview pen between 2pm and 5.30pm.

I really enjoy the Thursday interviews though because you can ask the drivers pretty much anything. Of course, you want to know about the race ahead but it also gives you an opportunity to ask them about other stories or incidents. Earlier in the day I had been chatting to Jenson Button and he had mentioned that Daniel Ricardo had talked about his overtake on Lando Norris the previous weekend and that he was disappointed it hadn’t been seen on the world feed.

So when I spoke to Lando in the interview pen later that day and he mentioned Daniel’s overtake, I told him not to worry as it hadn’t been shown on the world feed. He then responded and said that it wasn’t great and that even I could’ve made the move. I told him that Daniel was doing an interview with Jenson just around the corner and he should let him know that when he sees him (I may have been in a mischievous mood!)

Thursday was also an opportunity to ask Sebastian Vettel about his future. Photographer Mark Sutton had seen Sebastian getting into Otmar Szafnauer’s car after the race the previous weekend. Sebastian had said he just got a lift to a petrol station in Otmar’s Ferrari and then met his trainer there, and carried on his journey.

He told me in the pen that he was no closer to knowing what he was doing in 2021, however I have since learned that a deal with Aston Martin could be imminent.

I also managed to step away from the pen for a minute to see if Lando did end up interrupting Daniel’s interview and I saw him knock Daniel’s cap off before walking away. Next year is going to be fun at McLaren!

On Friday morning my first job was to introduce the F3 practice on air. I have really enjoyed covering F3 and F2 this season. There is some great new talent coming through and the races have all been exciting. They both seem to be open championships this season and we’ve had lots of different winners so far.

After that it was back to the office for our production meeting and then it was into F1 free practice. Friday is again another busy day as my lunch hour is filled with interviews with team principals before introducing the F3 qualifying. Once I had done that I finally got to sit down with Hulkenberg as it had been put back on the schedule after but Sergio had tested positive once again.

It was thought Nico had left the sport too soon although he says he hasn’t retired and he wants to come back full-time. We know he’s been watching it whenever he can and the desire to return to the grid is still as strong as ever. I can actually see him on the grid next year and I think Haas is where he could end up, but we don’t know anything for sure right now.

Nico told me that he wasn’t fit enough for F1 when he got the call and that he had struggled in qualifying the previous weekend with his neck. He’d only had a few days since then to try and strengthen those muscles that really get put to the test on a circuit like Silverstone.

My only disappointment with the interview was that Nico wouldn’t take his sunglasses off. This happens with drivers sometimes and in the past it’s not such a big deal. However, when we were all wearing masks, and he was also wearing a cap, it means you see so very little of the drivers faces. As such it’s a shame we didn’t see his face properly during the interview.

While carrying out the team principal interviews the majority of the conversation was of course about the Renault protest against Racing Point being upheld and the resulting fines and penalties.

However, I did get a chance to ask Mercedes boss Toto Wolff about Lewis Hamilton’s contract. Toto said the only point left was money and that neither of them liked talking about it so it was always the last thing to be decided. He said he expected it to be done at some point and the two of them to then go for pizza afterwards as they had in the past.

Saturday started early with more F3 on a cloudy misty morning at Silverstone. The sun soon came out though for another warm day and qualifying threw up a few surprises. Valtteri Bottas beat Lewis to pole position but Hulkenberg put in a fantastic lap to take P3. 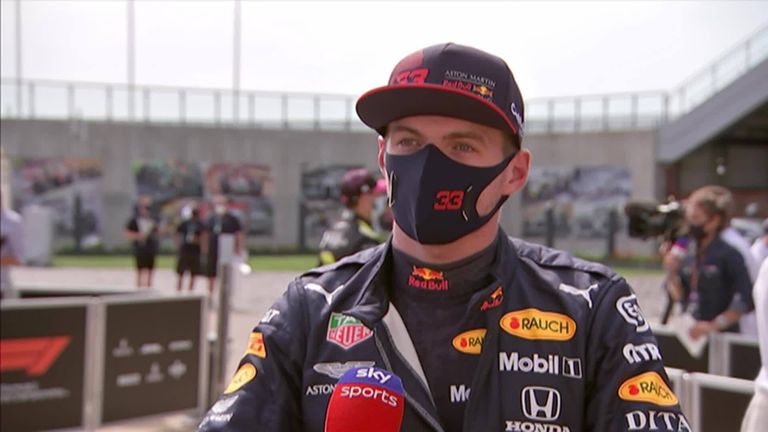 Max Verstappen had got through to Q3 on the hard tyre and when I spoke to him in the pen afterwards he had that confident air about him that he has when he’s got a good car underneath him and he feels like it’s going to be a good weekend.

I would fancy my chances against him at poker.

The 1950s looked like they were fun! All dressed up for the 70th Anniversary GP at Silverstone with @jensonbutton #F170 #silverstone #skyf1 #paddocklife #takemeback #sociallydistanced

The 1950s looked like they were fun! All dressed up for the 70th Anniversary GP at Silverstone with @jensonbutton #F170 #silverstone #skyf1 #paddocklife #takemeback #sociallydistanced

Sunday morning started with thrilling ends to the races in F2 and F3 and set the day up well. I did get a few strange looks though when I walked through the paddock to do the podium interviews for F2 as I was already in my 1950s outfit to celebrate the 70th anniversary.

We had decided to do it because there are two races at the same race track and we wanted to make a point of difference between them and also celebrate 70 years of the sport we all work in. The boys all looked fantastic especially Johnny in his houndstooth suit and flat cap. 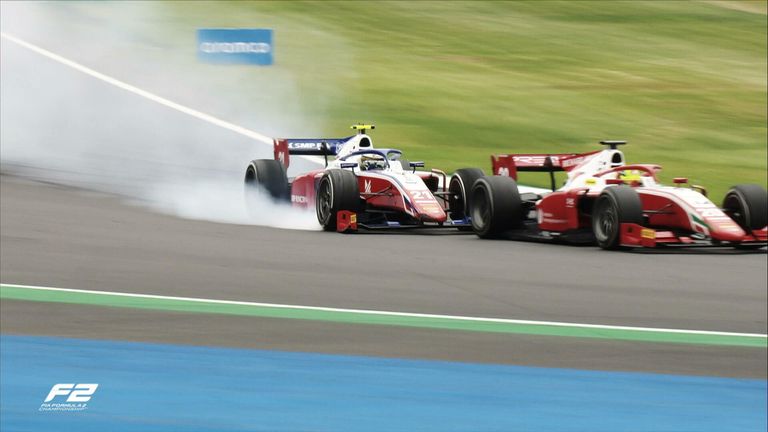 As there are no hospitality units or motorhomes at the racetrack at the moment, we continue to watch the race in our production office and it was incredible. Former drivers and experts trying to work out which strategy was going to be the best, who had a chance of winning, and who might have got it wrong.

It’s always a really difficult pen after a race when 19 of the drivers finish. They all come in at once and, with so few TV broadcasters allowed at race tracks right now, it does mean them waiting and queueing to do their interviews. Lots of drivers seemed perplexed as to how the race played out but also talked about tyre management.

When it came to Sebastian he answered his two questions in German to Sky Germany on my camera first and then I stepped in to speak to him in English. His radio message about the team messing up stood out in my mind and so that became the basis of my first question. I also wanted to know if he had any idea why there was such a deficit between himself and Charles Leclerc.

He seemed pensive and a bit down but I remembered back to Monza last year and how low he seemed to be then before absolutely turning it around in Singapore at the next race and answering all his critics, so maybe that’s what we are in for in Spain this weekend.

When the top three came into the pen I could see already that Lewis was smiling in other interviews and he was grateful for his second place after everything that happened during the race but Valtteri was obviously really disappointed. He told me he thought he’d been on a sub-optimal strategy and that Mercedes could have won the race that day.

Something that I put to Toto a short while later. Lewis indeed seemed pleased with his second place and seems to have really enjoyed the race too, although admitted Mercedes have work to do to understand how they lost the win.

It wasn’t the Silverstone I’ve known but it did throw up an exciting race and gave us lots to talk about. Will we see Perez in Spain? He still needs to test negative for Covid-19 but thankfully remains symptom-free. Meanwhile, Sergio also needs a seat and I can see him potentially going to Alfa Romeo.

French GP: What you need to know