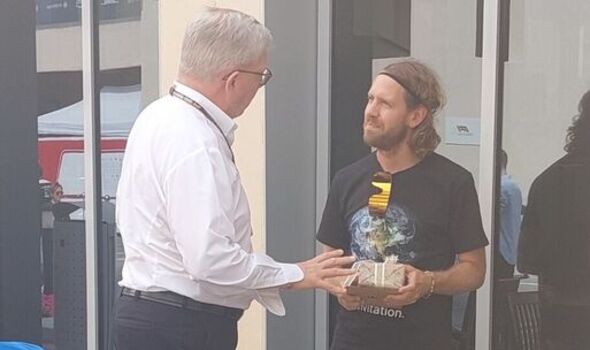 Sebastian Vettel was seen receiving a farewell present from outgoing F1 technical director Ross Brawn after his final Grand Prix in Abu Dhabi. The four-time world champion brought the curtain down on a 17-year career in the sport at the Yas Marina, and was emotional afterwards having delivered a farewell speech.

The 35-year-old finished with a 10th placed finish and a solitary point, and afterwards told the media he felt it could have been a more fitting farewell: “Today we maybe didn’t go for the best strategy. It was a shame because I think we could have turned the constructors’ championship around for us.”

He did however, express gratitude for the backing he got, adding: “Overall a big day, and a big thank you to all the support. So many flags and so many smiling faces, which has been very special, very nice.”

Prior to the race, all drivers went for dinner in Abu Dhabi to mark the German driver’s final bow, with the bill reportedly picked up by Lewis Hamilton. But there was also what appeared a more private goodbye between Vettel and the man who himself will be scaling back on his F1 commitments next year.

F1 journalist Adam Cooper tweeted a picture of Brawn handing Vettel a gift, with the caption: “This was a nice touch in Abu Dhabi – the retiring Ross Brawn quietly giving the retiring Seb Vettel a personal parting gift, no ceremony, no cameras.”

Despite the image being a photograph, many followers pointed out Cooper was noting the lack of a professional photographer or pose for a camera. And @LotusJPS1971 added: “And no ego,” while @skadeatron5000 wrote: “Absolutely lovely.”

Vettel was previously a dominant figure in F1, winning four straight titles at Red Bull from 2010-2013. He also enjoyed a six year stint at Ferrari, but was unable to break the stranglehold of Mercedes and in particular, Hamilton.

He spent the final two years of his career at Aston Martin, and will now be replaced at the team by another F1 legend. Fernando Alonso will be joining Lance Stroll at the Silverstone-based team, after confirming mid-season he was leaving Alpine.