Grand Prix organisers are hoping authorities will give the green light to a reconfigured Albert Park circuit that caters for crowds of up to 50,000 at the Formula One season-opener in Melbourne next March – subject to COVID-19 remaining under control.

Australian Grand Prix chief executive Andrew Westacott confirmed that F1 personnel arriving from overseas would need to quarantine but those specific requirements would be determined by government and health authorities.

Amid dramatic scenes at Albert Park last March, Australia's grand prix was cancelled at the last minute – with dozens of F1 visitors in town – as the potential impact of the global coronavirus pandemic became apparent.

Said Westacott: ''We have all put in the hard yards over winter to hopefully allow us to kick-start the economy, not just from a tourism and hospitality point of view but also a major events perspective. 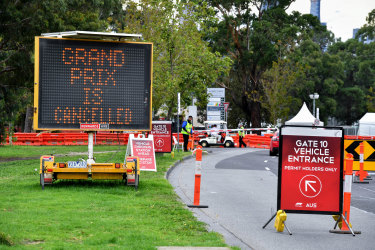 ''We are the third of the big summer events, the Boxing Day cricket, the Australian Open tennis and then the Grand Prix and that's where Melbourne needs to shine.''

Westacott says the Australian Grand Prix Corporation is planning to split the venue up into different zones ''to ensure we have a level of control and traceability over the people in the venues.

''We will produce smaller modular grandstands but we will dot them around (the track) and they will typically be nine rows deep and we can put new grandstands in new locations.

''We won't see the very large corporate facilities packed to the rafters with hospitality and fans that we are used to, but we will see new outdoor covered dining (which) will be configured to comply with typical restaurant, beer garden or outdoor entertainment guidelines.

''We have 176 hectares and that doesn't include the lake. We have 10.6 kilometres of track frontage.

''We can still have hospitality, a great experience, a COVID-safe venue. But it will be configured differently to previous years because we will redesign these facilities.

''We haven't decided on a number. The Grand Prix Corporation doesn't decide that, it will be a number decided by health authorities.

''But if we have a modular COVID-safe venue with all the checks and balances they require, then the venue becomes no different to the Gabba, the Adelaide Oval, the Sydney Football Stadium, Olympic Park, maybe the MCG Boxing Day test as all have significant crowds.

''I am working on the basis that if we are getting 30,000,40,000 or 50,000 crowds for major sporting events at interstate venues then that's a pretty good benchmark given the size of our venue.

The GP chief believes that ticket prices for fans will ''remain much the same as they were in 2020 albeit the event didn't fully proceed.''

He was guarded when asked if Formula One owners, who draw a rights fee reported to be between $50 and $60 million for the event to be staged in Victoria, will negotiate a discount because of the economic damage the world has faced in the past eight months.

''Contracts are created many many years in advance, but the approach we are taking is that if there are normal arrangements then normal contact conditions need to apply," Westacott said.

''If there are adjusted conditions we will discuss those in a confidential manner with our partners.

''The biggest focus is on F1 and the Grand Prix Corporation to get the event staged, get them here, get it run with crowds and get it run safely for local residents and for overseas visitors.''

Westacott said health authorities would ultimately decide on quarantine issues and conditions for teams and drivers – and ultimately how the event will proceed. But he pointed out that the F1 season had proceeded around the world since July with all personnel being regularly tested for COVID before moving from country to country for races within a quick turnaround schedule.

''They will have to quarantine. But the dialogue – and this is well and truly work in progress at federal and state level – is that they will quarantine but do so in a bubble that excludes interaction with the public.

''Therefore movement between designated hotels and the circuit will be controlled in the same way that maybe AFL teams went to WA and were able to control their particular bubbles.