Denny Hamlin exited his car at Richmond Raceway in September just wanting to disappear, much like his car had in a race where he started second and finished 16th.

He briskly walked his way through the garage while his Joe Gibbs Racing teammate Kyle Busch celebrated a victory. Hamlin described the night as “really disappointing” in “running like a bag of (expletive).”

Hamlin’s championship hopes ended a week later at Charlotte Motor Speedway. Seven weeks after that, he finished with his first winless season in 13 years of racing in the NASCAR Cup Series.

Days such as the one at Richmond didn’t hurt Hamlin’s confidence. The 38-year-old Joe Gibbs Racing driver has always carried himself with a quiet swagger.

But it did lead to the constant question: How can his teammate run so much better? By the end of the 2018 season, Busch recorded eight wins and 22 top-five finishes while leading 1,469 laps; Hamlin finished with no wins, 10 top-fives and 380 laps led. 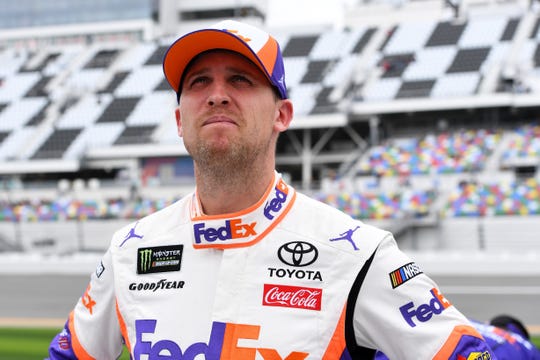 After going winless in 2018, Denny Hamlin kicked off the 2019 season by winning the Daytona 500. (Photo11: Mike Dinovo, USA TODAY Sports)

One victory, especially at the high-banked Daytona International Speedway, doesn’t serve as a verdict of whether Hamlin has found the answers. His win Sunday in the Daytona 500, though, will make any questions leading into this weekend's Folds of Honor QuikTrip 500 (2 p.m. ET, Fox) at Atlanta Motor Speedway — the first with NASCAR’s new engine configuration that will cut horsepower from 750hp to 550hp — much easier.

“It’s about going out there and doing your job and winning a bunch of races.”

Throughout last season, Hamlin tried to figure out why he couldn’t match the performance of Busch. Hamlin won four poles and had 14 races where he started in the top-five, but he couldn’t turn that into full-race success.

“If we had a setup similar to Kyle, it was how was he driving it versus how was I driving it?” Hamlin said. “A lot of times, we were making the same speed, but he would just be better on restarts or their team would be executing a little bit better.

“All those little things just mattered. You just try to find holes in all the details.”