DAYTONA BEACH, Fla. — With only six cars left on the track, Erik Jones, who had a beat up stock car, got a push from teammate Denny Hamlin to win the 42nd annual Busch Clash.

The end of the Clash was marred by a string of wrecks and yellow flags that thinned the 18-car field to a half dozen.

Hamlin was a lap down but stayed on the track to help his Joe Gibbs Racing teammate.

“Denny stuck with us that whole last lap,” Jones said. “We owe him one for sure. We locked on and stayed connected. This is a real cool race.”

Hamlin said “I didn’t care if I pushed him into a wreck. I knew I just needed to push him.” 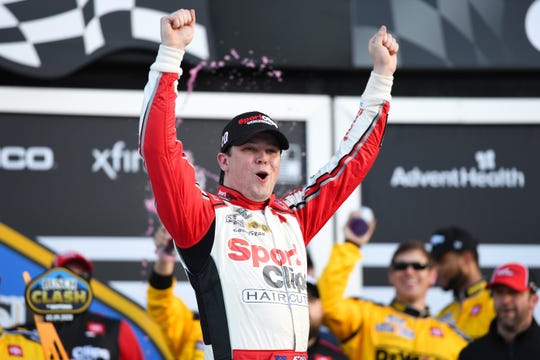 The first big crash occurred on Lap 66 of a scheduled 75.

Busch’s No. 18 Toyota got into Logano’s No. 22 Ford then Busch careened into Keselowski’s No. 2 Ford, which smacked the outside wall.

Logano was trying to block Busch.

“My car loosened his car first and we all started down the hill,” Busch said. “That’s why we stay single file because we go crazy.”

Regulation ended when William Byron set off a chain reaction crash after tagging Ryan Newman after passing the start-finish line on a restart, bringing out the third caution.

The majority of the field was caught up in the mess. Nine stock cars went to pit road for repairs, and sent the race to overtime.

On the first overtime restart, Hamlin’s No. 11 Toyota looked like it cut a tire in Turn 3 sparking another big crash.

What. A. Pileup. Wow. pic.twitter.com/j1mp4OS9RQ

At least eight cars were involved. Seven cars appeared to wreck together as they came off the banking and plowed through the infield grass.

The second overtime restart came off no better. Chase Elliott sparked another incident when he tried to pass Kyle Larson on the inside after pushing him to the lead.

Elliott's car suffered the most damage, but Larson was able to make repairs and return to the field, which saw only four other cars on the lead lap: Jones, Austin Dillon, Ryan Newman and Clint Bowyer.

What channel is NASCAR on today? TV schedule, start time for Darlington race