"Ryan Newman is being treated at Halifax Medical Center," the statement read. "He is in serious condition, but doctors have indicated his injuries are not life threatening.

"We appreciate your thoughts and prayers and ask that you respect the privacy of Ryan and his family during this time. We appreciate your patience and cooperation and we will provide more information as it becomes available."

Newman in the No. 6 Ford surged to the lead on the last lap of the race — which was delayed from Sunday because of rain — with the help of Ford teammate Ryan Blaney. But Newman’s car turned and slammed into the wall after more contact from Blaney's No. 12 then flipped into the air before being hit hard again by Corey LaJoie’s Ford before landing on its roof and skidding across the track.

Fire and sparks shot out from the car as it slid from the track and onto pit road.

Rescue workers rushed to the car and worked for minutes to get it upright and get Newman out of the car. An ambulance departed Daytona’s frontstretch at 8:10 p.m. with its sirens on, according to The Daytona Beach News-Journal. 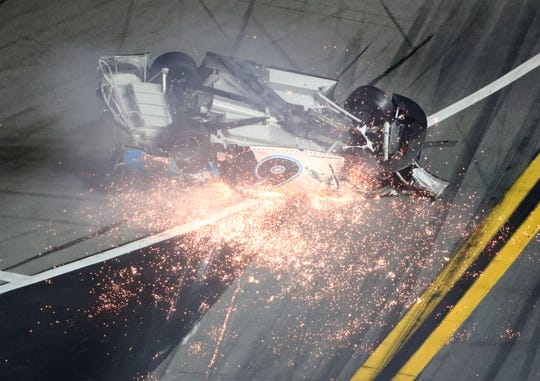 Ryan Newman's No. 6 Ford skids across the track on its roof after crashing and flipping on the final lap of the Daytona 500. (Photo: Mark J. Rebilas, USA TODAY Sports)

“I hope he’s all right,” a noticeably shaken Blaney said on pit road after finishing second. “That looked really bad and not something you want to do. Definitely unintentional.

"I was just committing to pushing him to the win once he blocked a couple times, was kind of beat. Just hope Ryan’s all right. It sucks to lose a race, but you never want to see anyone get hurt.”

Joe Gibbs, owner of Hamlin car, apologizes for celebration immediately after race. They didn’t understand serious nature of Newman crash until they all got in Victory Lane. @[email protected]@ESPN690Jaxpic.twitter.com/j6ENstn7Cp

Going into the final lap, Hamlin in the No. 11 Toyota was out front with Newman and Blaney right behind him, respectively. The two Ford drivers went to the bottom of the track, and Blaney gave Newman a huge push as they both passed Hamlin on the backstretch of the 2.5-mile track.

With Hamlin in third, he then gave Blaney a push as they chased Newman.

“A big run and [Hamlin] was pushing us pretty hard,” Blaney’s crew chief, Todd Gordon, told USA TODAY Sports. "Had a run and you gotta try to take it. Ryan pulled down in front of it, and Blaney tried to push him. And cars didn’t line up perfectly, and he spun.”

Here is the final lap of the Daytona 500 in which Ryan Newman’s car was flipped at the line.

We will continue to keep you updated on his status as we learn more. pic.twitter.com/qkEwQBpoP0

Blaney said he was trying to push Newman ahead of Hamlin to try to get a Ford to victory lane instead of the Toyota, but it “just kind of played out in [Hamlin’s] favor.”

“We were coming so fast it’s hard to make a quick move, especially with someone pushing you,” Blaney said.

Concerned about Newman’s condition, Blaney reiterated that causing him to spin was unintentional.

“I would be [shaken up] too if I looked at that,” Gordon said about his driver. “Unfortunately, it’s a product of what this package is and how much of a run you make on everything. Hopefully, Ryan Newman’s all right.”

NASCAR at Daytona: Odds, prediction, sleepers, drivers to watch for The Clash