Ferrari’s Charles Leclerc grabbed a surprise pole position for the Azerbaijan Formula One Grand Prix on Saturday in a qualifying session littered with crashes and four red flag stoppages. 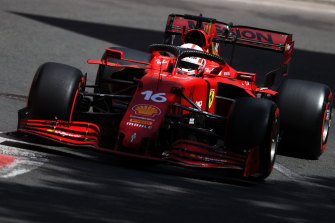 “It was just a stupid qualifying to be honest,” said the Dutch driver, who is four points clear of Hamilton after five races.

The pole was Leclerc’s second in a row and once again came as a result of the final session being stopped early by a red car banging into the barriers.

At home in Monaco two weeks ago it was Leclerc who set the fastest lap and then crashed, and in Baku it was a smash involving teammate Carlos Sainz that brought an end to the track action.

Leclerc owed some of his time of one minute 41.218 seconds to Hamilton, whose car provided a hefty aerodynamic “tow” down the long straight.

“I think we would have been there or thereabouts for pole without the slipstream, so it’s a good day. I did not expect to be as competitive as we were today,” said the Monegasque.

“I think it’s going to be difficult to keep these two behind me,” he added of the title frontrunners.

Hamilton has a record 100 pole positions but his placing still came as a surprise, with Mercedes struggling for pace through practice and Red Bull on top.

“This is such a monumental result for us because we’ve been struggling like you couldn’t believe all weekend,” said the Briton, who was only 11th in opening practice.

“We’ve moved around, made so many changes, over these two days. Just chasing our tail and it’s been so difficult.”

The first phase of qualifying was twice stopped, with Canadian Lance Stroll smashing his Aston Martin into the barriers at turn 15 and Alfa Romeo’s Antonio Giovinazzi following minutes later.

“I was kind of committed to the corner and at that point it just pushed me a bit deep and I hit the wall,” said Stroll, son of team owner Lawrence Stroll.

Hamilton had been fastest in that opening session ahead of the two Red Bulls.

Australian Daniel Ricciardo then crashed his McLaren after locking up at turn three in the second phase, bringing out the red flags for the third time. Ricciardo will start from 13th on the grid. 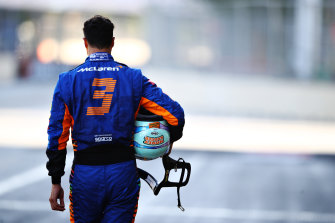 Daniel Ricciardo crashed in qualifying and will start from 13th.Credit:Getty Images

Tsunoda’s teammate Pierre Gasly, fastest in final practice, starts fourth with Sainz qualified in fifth and McLaren’s Lando Norris sixth on a street circuit with a reputation for drama and where overtaking is possible.

Norris was summoned to stewards afterwards for failing to return to the pits immediately red flags were waved, and was handed a three place grid drop — less than the normal five — with three penalty points.

“Just chaos really,” the Briton said of the session. “I slowed down straight away, I didn’t feel like I did anything wrong.”

“It was messy, it was difficult to get into the rhythm, into the pace,” commented double world champion Alonso of the session.

“It’s a little bit unfair probably that the people that crashed. They repair the car and they start in that position tomorrow,” added the Spaniard.

It remained to be seen whether Sainz and Tsunoda’s cars had suffered gearbox damage, which would incur grid drops if changed.

The Frenchman steered his Yamaha bike through a flying lap in 1 minute, 38.853 seconds on the Barcelona-Catalunya Circuit. Australia’s Jack Miller clocked the second-fastest time despite a crash that he emerged from unscathed. Johann Zarco was third.

The 22-year-old Quartararo leads the competition after six races with 105 points, followed by Zarco with 81.

“We know that we still have some margin for improvement, but I am a thrilled to be on pole once again,” Quartararo said.