Carlton need to ask themselves what they stand for after “20 years of rubbish” and rebuilds that amount to nothing, with too many comfortable players content to accept a pay cheque and not stand for anything, according to club great Mark Maclure.

“What do they actually stand for? They have to ask themselves that question – what do we stand for? What does the club stand for? It’s been 20 years of rubbish,” said Maclure, the former club captain and three-time premiership player. 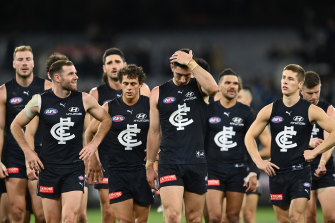 Carlton players leave the field after the loss to Port Adelaide on the weekend.Credit:Getty Images

“They are non-competitive. They have enough talent but why are they non-competitive? I would rather have a bunch of kids who want to wrestle and scrap and stand for something than stars who think they are good.

“They need to control their own destiny, everyone has to be accountable for what they do and peer pressure is stronger than coach pressure and I don’t see it at Carlton.

“This is the essence of it, if you don’t have a group that demands it of each other then you don’t get a result and that is what I see, too many non-competitive players happy to coast. They need someone hard and demanding in there.

“Mitch McGovern just does not look like he wants to compete and there’s a few more there – [Sam] Petrevski-Seton doesn’t and Lachie Plowman can’t [compete]. The selection of some of those blokes is ridiculous, don’t tell me Lachie Plowman can stop Robbie Gray. You serious? Robbie Gray?” 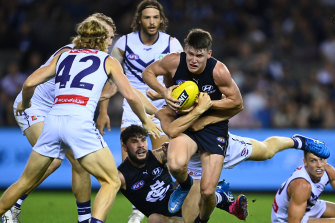 The Blues’ Sam Walsh on the move.Credit:Getty Images

“[Patrick] Cripps fights and scraps and [Sam] Walsh is a superstar, he is demanding and a competitor but I don’t see it from enough of them. Who is the general in the forward line? Can you tell me who it is? They don’t have one.”

Maclure and other former Carlton people who did not want to speak on record were frustrated that the Blues had been playing a mature side but were not flag or finals contenders.

Carlton have had injuries to key players, principally Charlie Curnow who has missed at length, and Jack Martin has played one game this year, while emerging ruck Tom de Koning has also been out and Zac Fisher has played just two games.

They were poor against Port Adelaide, who were missing Zak Butters and Xavier Duursma, and after trading for running players Zac Williams and Adam Saad in the off-season they have yet to meet expectations that they would push up the ladder and into the eight.

They have fallen away this year on the field in contested ball (ranked 11, down from 6 last year), tackles (now 17th down from 11) and scoring from turnovers (15th down from 11). They are in the top five for points from kick-in differential and top five in winning clearances.

Under David Teague, Maclure and other former players have questioned the use of younger players and the roles they are given in the team. The young players when they have played have not played critical midfield roles. 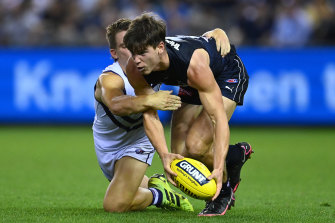 Paddy Dow in action against the Dockers.Credit:Getty Images

“What’s wrong with [Liam] Stocker? What is wrong with Paddy Dow? They are not going to win the premiership so why not play these blokes?” Maclure said.

“Sydney climbed back up the ladder in two or three years, that is the comparison to Carlton. Look at what has happened to Sydney – they played finals for about 20 years in a row, they drop out, they pick kids and they are back up again.

“You can talk about the academy, but how many academy players have they got? 10. They have had a thousand players go through there, they spend a million a year and they have got 10 players. They invest heavily in that.”

He also questioned the value of persisting with Eddie Betts and Marc Murphy. “They look done to me,” Maclure said.

Super Rugby teams roll out white away jerseys for 2021 season

Paul Roos a ‘sounding board’ for new coach Noble