The Morris family are hoping an era that has lasted 5612 days – more than 15 years – in the NRL does not come to an end on Friday night.

Josh Morris will be trying to keep his pursuit of an elusive premiership alive when the Sydney Roosters take on Manly.

Unlike twin brother Brett who won titles with St George Illawarra and the Roosters, and father Steve, who won a premiership in his rookie year with the Dragons in 1979, Josh, a 324-game veteran, is yet to celebrate a grand final triumph.

The 35-year-old has ticked every box in the game, including NSW and Australian jumpers, and featured in two grand final losses during a 14-year career.

Brett and Steve will be glued to their TVs back home and hoping the Roosters can prolong Josh’s career.

“I’d love nothing more than to see Josh play in another grand final and win a grand final,” Brett said. “It would be a dream come true, not just for Josh but the entire family. 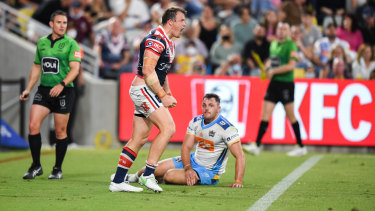 “You can represent your state and your country, but winning premierships is what you want to do. I was lucky to win two. I came to the Roosters at a good time. But they are so hard to win. Some guys go their whole careers and don’t win one.

“‘Hindy’ [Nathan Hindmarsh] is one guy I think of who would have given anything to win a premiership. He played more than 300 games, represented his state and country, but it was the one box he didn’t tick.

“I’ll be at home watching the game with the kids and screaming at the TV like we do every week.”

Brett, who debuted in 2006, was forced into retirement because of a knee injury midway through the year and has since accepted a three-year coaching role with the Bondi club. Josh, a debutant in the opening round of 2007, also announced last month this season would be his last.

Steve sat down at the start of the year and planned to attend the final month of regular games to see Brett and Josh in the flesh, and feared Josh’s time would end last week when the Gold Coast looked ready to spring an upset.

“I was sitting there last week thinking, ‘this is going to be it’,” Steve said.

“Rugby league has been a big part of my life and their lives. I’ll be shedding a tear by myself with nobody watching should the Roosters lose.

“I’ve watched nearly every game since the boys have started. I’ve only missed a few. I’ll be cheering hard for Josh.” 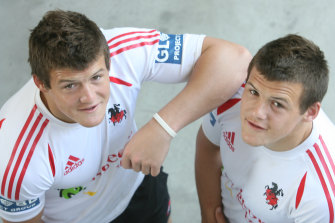 At least one of the Morris twins have been a part of the NRL for 5612 days – more than 15 years.Credit:Simon Alekna

It was not lost on Brett that Manly was coached by Des Hasler, the man who worked with the twins at Canterbury, and was even singled out for praise by Josh during his retirement announcement.

“Josh and Des have a long friendship, Josh played some really good footy under Des and enjoyed his time under him, but that friendship will be tested on Friday night,” Brett said.

Brett said there was no way you would see an injury toll like the Roosters had endured “for a long, long time” and praised his teammates for continuing to aim up against the odds.

Hindmarsh, Andrew Ettingshausen, Geoff Gerard, Simon Mannering, John Morris and Morris, potentially, are the only members of the 300-club to not be part of a premiership-winning team.

‘The silver lining of our lockdown’: Demons family hail winning season ahead of AFL grand final 2021