The North women play in a knockout AFLW final against Collingwood tomorrow and Jess Duffin has a far changed game day this campaign….

Preparation for a final looks very different for North Melbourne’s Jess Duffin in 2021.

As a top-order batter for the Australian women’s cricket team, the 31-year-old would get a good night’s sleep and have an easy morning before a World Cup final – she won four and was player of the match in two. 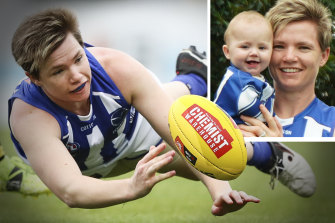 In the lead-up to Saturday’s qualifying final against Collingwood at Victoria Park, Duffin has been busy with her teething nine-month-old daughter Georgie and moving house with husband Chris while living with her parents.

“Game day varies, when Georgie’s up, I’m up and that can be anytime from 5am to 8am. I’ll take her for a walk in the morning. It’s about her and I don’t really think about the game until I drive to the game,” she told The Age.

There are no late changes for either side and for those Dogs fans who wondered if Mitch Wallis would be a late inclusion, Fox Footy reported Wallis played in a reserves scratch match today kicking one goal.

The medical subs will be Kyron Hayden (North Melbourne) and Pat Lipinski (Bulldogs).

Hayden is listed on the club website as a midfielder with experience in defence and good ‘defensive nous’. He didn’t play last year due to an achilles injury but has played eight games. It will be a big moment for Hayden should he play today.

Lipinski is a midfielder/forward who is dangerous around goal and played as a forward last season while others key forwards were injured. Lipinski would be a threat against a tiring opposition.

Kangaroos concede too many inside-50s

‘We pioneered this’: Ziebell backs Roos to show they deserve Good Friday game

North Melbourne captain Jack Ziebell says the Kangaroos will use calls they should lose their Good Friday game to spur them on against the Western Bulldogs on Friday.

The Kangaroos led the charge for Good Friday football and involving the Good Friday Appeal in the match, but they faced questions this week about whether their struggles on the field should mean other, more successful teams play in the match instead. 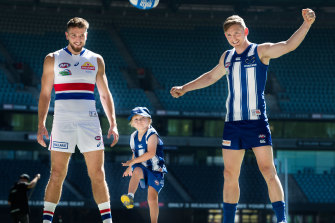 The club and former players have argued other clubs don’t face the same criticism with Carlton, Richmond, Collingwood and Essendon all keeping their marquee games despite facing tough seasons over the years.

These two sides may be at opposite ends of the ladder after two rounds but their recent match-ups have been close ones so we could well be in for another tight game today.

Please feel free to leave a comment on the blog at any time and enjoy the game to come.

The Marshall text message that made Farah’s 300th a reality

Why staging for free kicks is not a crime