‘A lot of challenges’: Sons of guns ready to make their mark

One son of a gun will begin his AFL career on a limited training schedule, but another is already firmly in the frame for selection in round one next year, as the league’s elite draftees begin their professional careers.

It was all smiles at Marvel Stadium on Thursday, when the Victorian-based players taken in round one of the national draft gathered for a photo shoot and introduction to life in the AFL fishbowl. 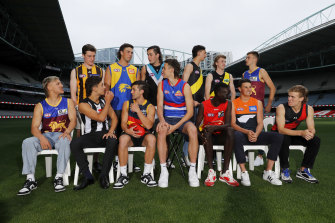 The Victorian-based first round draftees at Marvel Stadium on Thursday.Credit:AFL Photos

For some, it was the first time they had met their club media managers, while one player nervously sent a social media message to his club’s supporters that required a couple of takes. But one thing all players had in common was a desire to get to their new clubs next week and begin training.

Star midfielder Nick Daicos could not wipe the smile from his face as he contemplated life at Collingwood, the same club where his father Peter was a champion, and brother Josh currently plays.

AFL draft hit by COVID-19 case, but event to proceed as scheduled

The 2021 AFL national draft will continue as scheduled on Thursday night, despite a COVID-19 scare at Marvel Stadium emerging from the opening night on Wednesday.

A staffer from an unnamed club tested positive in one of the venue’s corporate suites on the first night of the two-night event.

The staff member later also attended a function at the London Tavern in Richmond where many draftees were situated, but was there for a small period of time and had minimal contact with others there.

As a result, to ensure additional risk mitigation, the AFL said all club representatives have been told to stay in their respective suites at the Docklands stadium and wear masks for the duration of the draft – starting with the second round – as well as undergo rapid antigen tests upon arrival.

G’day everyone. It’s Roy Ward here and I’ll be leading tonight’s AFL draft live blog as we get to the business end of the draft following last night’s first round which saw Jason Horne-Francis go to North Melbourne as the No.1 pick.

The teams will go through picks 21-92 to fill out the remaining places on their lists, expect the picks to come in faster than last night.

A couple of names to watch for early on are Josh Gloater and Blake Howes who were on the fringe of the first round selections heading into the draft.

Please feel free to leave a comment on the blog and enjoy the night to come.