Amid player concerns that the new injury substitute will be rorted, the AFL plans to have hurdles in place that will stop clubs from exploiting the rule for an on-field advantage.

While the rule – which would mean an injured or concussed player would be replaced by a 23rd man – is viewed by AFL sources and clubs as a fait accompli, remarkably, the AFL Commission were yet to formally approve it on Tuesday night, with the league planning to brief clubs on Wednesday – just a day before the first game, giving Richmond and Carlton scant time to prepare. 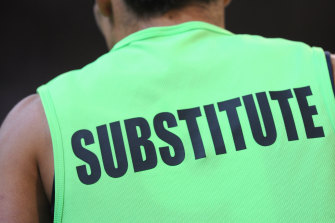 Injury substitutes are set to be introduced for season 2021.Credit:Pat Scala

A player who is concussed will not be allowed to play the following week under the AFL’s new concussion protocols, but AFL sources said there would be hurdles in place if a club tried to rort the expected substitute rule, such as by substituting a player who wasn’t really impaired.

Details of how the rule would operate were still being ironed out on Tuesday, the AFL executive taking the view that the 23rd man rule was worth introducing, even this late and with considerable criticism, if it prevented players from staying on the field when concussed or injured.

The player must be ruled out of the game with injury or concussion in order to be eligible to be replaced.

“It clearly has the capacity to be gamed and will be, we would expect,” Marsh said.

Club sources said the extra match payment – $5000 a game for every team – was expected to be outside the salary cap, and also excluded from the soft cap on football department spending. One source at club level estimated it would cost the competition in the vicinity of $3 million, with $110,000 in match payments, plus bonuses.

The rule only gained traction when AFL chief executive Gillon McLachlan and footy boss Steve Hocking met AFL senior coaches at a breakfast last Thursday, one week from the start of the season, with influential coaches Alastair Clarkson and Damien Hardwick among those in favour of the 23rd man rule.

The last-minute rule change has frustrated players, who also maintain concern that extending game time while cutting rotations could be a “barrier” to pandemic fixture flexibility.

Marsh said the combination of the new man-on-the-mark rule, a cut to rotations and extending quarters back to 20 minutes from 16 minutes this season would become a “real issue” if the league made requests to play games off short breaks, as happened in 2020’s pandemic-affected season.

He also said that the injury substitution would likely not have been necessary if quarters were kept at 16 minutes or extended to 18 minutes, and if rotations were not cut from 90 to 75 per game, as was the union’s wish.

Coaches have pushed for the introduction of substitutions in an attempt to ease player fatigue.

“To go straight back to normal length games with fewer rotations is going to be a real issue if it comes to requests to compress the fixture. I don’t believe it will be possible from a player’s perspective,” Marsh said.

“We spoke to the player leaders about it [concussion/injury substitution] over the weekend. It is something the players will live with, there is real frustration with the process here – why are we, a week out from the season, considering these changes when this was foreseeable and this should have been thought through last year.

“The broader injury sub, I think the players would prefer this to be limited to concussion.”

“The starting point for this [substitute] was concussion … and the combination of the man-on-the-mark rule, increasing scoring, making the quarters longer, [less] rotations meaning there’s more stress on the players and then that stress goes up even more if a player is concussed.

“The pressure that potentially puts on the individual player to try to position that they’re not concussed to the doctor to take pressure off the rest of the team.

“What happens if a player goes off who is injured, is replaced, and then a player goes down with concussion five minutes later? Are you addressing the core problem then?”

Marsh said the AFLPA made their opposition to the interchange cuts and increased quarter lengths clear last year.

The decision to make the substitute medical – meaning any game-ending injury, not just concussion, would trigger a substitution – would mean that both Richmond and Geelong would have been able to substitute Nick Vlastuin and Gary Ablett respectively in last year’s grand final, had Ablett been deemed unfit to continue.