The AFL believes it is still possible to host the grand final in Victoria despite the stage four restrictions in the state for the next six weeks.

When asked if stage four restrictions put a line through the AFL grand final being held in Victoria, a spokesman for the league replied "no". 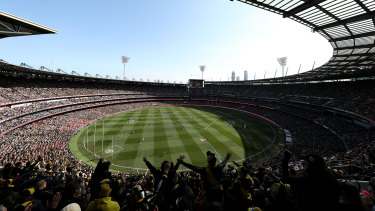 Big dance: The 2019 AFL grand final between the Richmond and Greater Western Sydney at the MCG.Credit:Getty Images

While stage four restrictions are set to finish well before the mid-to-late October tentative date for the grand final (should the season get that far), there has been no AFL footy played in Victoria since early July.

Queensland has opened its borders to host most of the competition with games also played in WA, SA and NSW.

Most of the remainder of the season will be in Queensland, who are considered the front-runners for the grand final because of their co-operation in accommodating the season, although WA and SA cannot be ruled out because of their big stadia.

However this was then revised in July to October 17, or Caulfield Cup Day.

Pakula has said the AFL grand final will not be played at the same time as the Caulfield Cup.

"I did speak to Gillon this morning once I saw that [October 17 date] and re-obtained the commitment from him that they definitely won’t go head-to-head with one of our major race days whether it’s the Caulfield Cup, the Cox Plate or otherwise," Pakula told RSN in July.

In 2018 the AFL, MCC and state government recently signed a $500 million deal to keep the grand final at the MCG until 2057, although the pandemic threatens to make a mockery of that.