As the fallout from the emotional clash continued on Saturday, Cats’ forward Gary Rohan was offered a two-match suspension for striking Neale, in the incident that sparked Scott’s engagement with the Lions midfielder.

The match review officer graded Rohan’s action as intentional conduct, medium impact and high contact after the 29-year-old threw out an arm that caused Neale to fall to the ground holding his jaw.

No action was taken against Neale although Scott had said post match that the Lion initiated the contact.

“I think Neale strikes Gary on the chest and then Gary struck him on the chest,” Scott said.

“The vision is clear, I am not certainly not saying he did the wrong thing, that’s footy, but I have had a pretty good look at what Gary did and I’m comfortable with it.”

The Lions’ Charlie Cameron also copped a $2000 fine for striking Geelong’s Shaun Higgins in the second quarter with the MRO assessing his act as intentional, low impact to the body.

Earlier in the day Fagan had confirmed on 3AW that he had a vigorous discussion with Scott but refused to reveal the details. However, he made it clear that he didn’t think coaches should engage with opposition players. 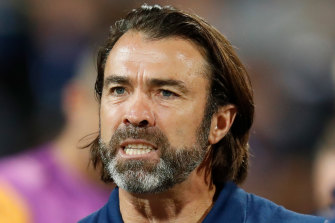 Geelong coach Chris Scott will have his encounter with Lions players reviewed by the AFL.Credit:Getty Images

“I suspect he didn’t hear all of that. That is all that was said. I think a few of the Brisbane players – they were not paying me compliments but I didn’t say anything after that.”

The incident was just one of an emotion-charged Friday night encounter with the Lions denied a free kick in the goal square inside the final minute when Mark Blicavs incorrectly disposed of the ball as Zac Bailey tackled him with the Lions trailing by two points.

Umpires boss Dan Richardson acknowledged that a free kick should have been paid to Bailey as Blicavs had prior opportunity.