Australian Rugby League Commissioner Megan Davis says rugby league is “vigilant to the ever-present scourge of racism within the game” as the fallout from allegations surrounding the Hawthorn AFL club’s treatment of Indigenous players continues.

The AFL is reeling from the findings of an external review commissioned by Hawthorn, which claims key figures within the club pressured Indigenous players to be separated from their partners, and pressured one couple to terminate a pregnancy to ensure the focus remained on football.

The shocking development comes at a time when South Sydney and North Queensland, two clubs considered the benchmark for their relationship with Indigenous communities, have made it to the penultimate weekend in the NRL competition.

Professor Davis, a proud Cobble Cobble woman who is the pro vice-chancellor of UNSW and acting commissioner of the NSW Land and Environment Court, said rugby league had the power to change Indigenous lives for the better.

“By and large our code has been primarily co-located in Qld and NSW, with robust Indigenous participation in the other states. We had the first Indigenous captain of any elite code ever in Australia in Artie Beetson.

“We have an indigenous council and an elite players body who provide their voice directly to the CEO and the Commission on matters relating to First Nations people. 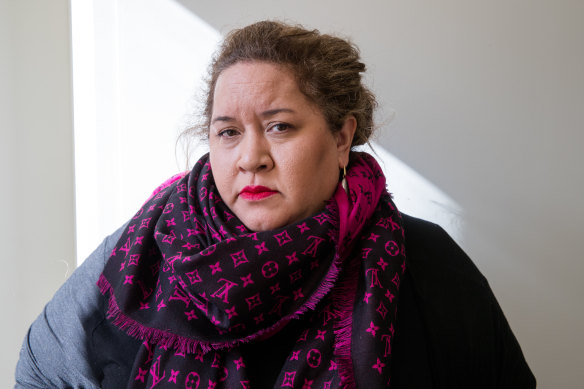 “Our flagship is Indigenous All Stars. A globally recognised game that showcases and celebrates Indigenous elite talent.

“We don’t compare ourselves to other codes. As a code, we don’t presume to be perfect. We get some things wrong and we get some things right. We muddle through things. We are alive and vigilant to the ever-present scourge of racism within the game. Again, we don’t always get things right. But the Australian Rugby League Commission takes our relationship with mob very seriously.”

Rugby league became the first Australian sport to appoint an Indigenous player as its national captain when Beetson captained the 1973 Kangaroos side against France. As of last year, 13 per cent of its men’s competition was made of players who identify as Indigenous. 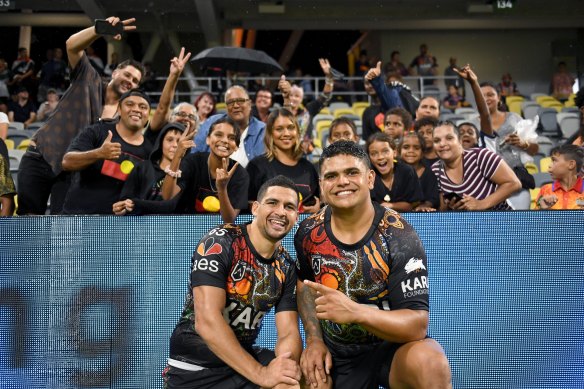 Cody Walker and Latrell Mitchell at the 2021 Indigenous and Maori All-Stars match.Credit:NRL Photos

By comparison, Collingwood had a total of only two players – Wally Lovett and Robbie Ahmat – play for the club before the turn of the century.

The Rabbitohs have a long and proud history of fostering Indigenous talent. In Latrell Mitchell and Cody Walker, they have two of the biggest stars in the game.

“One of the things we’re tremendously proud of at the club is our relationship with the Indigenous community,” said Souths CEO Blake Solly.

“Not only do we believe that players like Cody Walker and Latrell Mitchell are wonderful athletes, they’re great people as well. Their contribution and respect for the community speaks for itself. The work that Souths Cares does on a daily basis with the Indigenous community is something we’re also extremely proud of.

“It’s authentic and it transforms the lives of many over the course of the year. Likewise, the Cowboys have a similar relationship and community programs. It’s something that, as a sport, we should be really proud of.

“It’s fantastic that two of the final four clubs in the NRL competition have strong relationships with the Indigenous community.

“Both the Cowboys and Rabbitohs have had the most gifted Indigenous athletes performing at their best over a long period. I don’t think it’s a coincidence that if you buy into supporting the Indigenous community from the community level up – you get success on the field. There’s a strong link between investing in the community and performance on the field.”

The Cowboys also have a strong connection with the Indigenous community. Like Souths, some of the club’s greatest players – including Johnathan Thurston and Matt Bowen – are involved in its community programs. The most notable is NRL Cowboys House, which provides accommodation for 104 young Aboriginal and Torres Strait Islander students from the region’s most remote and educationally disadvantaged communities.

“What we’re able to do is use the trust and the power of the Cowboys brand, with these Indigenous role models we’re fortunate to have at this club, to be able to talk to those kids directly about the opportunities in education and why they should go to school,” said Cowboys CEO Jeff Reibel.

“We have so many wonderful graduate stories of young men and women who are now in university or have a job. That might be the first time in generations that they’ve been able to work full time, the families are so proud of it. NRL Cowboys House is all about giving them that opportunity to do that.”

Stream the NRL premiership 2022 live and free on 9Now.