Zac Bailey should have had the chance to kick the winning goal for his side last week. He would have wondered if he’d ever get the opportunity to do so again. He only had to wait six days to find out, and the answer was resoundingly in the affirmative.

Forced into exile, the Brisbane Lions twice worked their way back into the game against Collingwood at Marvel Stadium on Thursday night. Ultimately it fell to Bailey, denied the chance to win the game against Geelong after an incorrect holding-the-ball non-decision, to step up from 45 metres and revive his team’s flagging season. 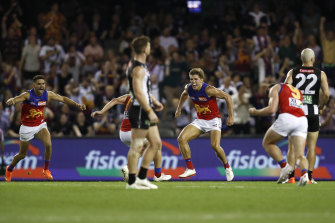 He was up to the task, and pandemonium ensued after as gutsy a one-point win as most will see.

Much like in Geelong, the Lions trailed for almost the entire game. They came back from 25 points down midway through the second term to edge back to within a goal, and then surged again after falling 14 points down during the final quarter. But they could not creep their way in front – before the siren at least – with a missed Hugh McCluggage set shot only levelling the scores.

Callum Brown could not convert down the other end either but Josh Daicos set sail in heavy traffic, bringing his father and brother to their feet with a stirring steadier. 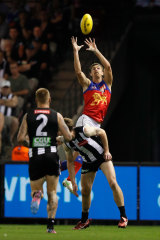 The Lions still had chances. Joe Daniher had bested Darcy Moore in their gripping duel but the former Bomber let himself down in front of goal – not a new story – badly tugging a regulation shot in the dying minutes before Jarryd Lyons’ legs failed him as he looked to level the scores.

But Bailey had the final say.

Brisbane had looked tentative early and were on the back foot almost from midway through the first term. A costly Jack Payne turnover was emblematic of their malaise. Brodie Grundy was dominating the hit-outs as expected and while the Pies weren’t taking full toll in the middle, the ruckman was still crucial in general play.

But the Lions grew in confidence through the back half of the second term, fighting their way back. Collingwood did not apply a hard tag to Lachie Neale, who was excellent in the first half but faded as the game wore on.

Brayden Sier has struggled to cement himself in the Magpies’ side, and even when he has played has not been known as a particularly flashy player. But he kicked a goal worthy of any highlight reel early in the game, snapping truly in heavy congestion from 45 metres out on a flank. The big-bodied midfielder duly celebrated with a “double cobra”. There were some cracking majors in the first half. After appearing ginger in the lead-up to the match, Neale sunk a long-range goal which belied his diminutive stature. Daicos applied a crunching tackle on Connor Ballenden to win a free kick before leaving the young Lion flat-footed as he sent through a bending beauty. And unsurprisingly Charlie Cameron got in on the act, leaving a stumbling Chris Mayne in his wake as he danced his way to perhaps the goal of the night during the Lions’ surge late in the second term. 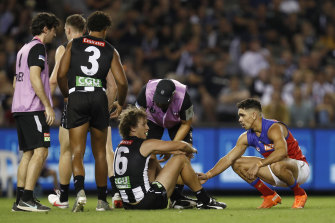 Chris Mayne down after a head knock.Credit:Getty Images

The Pain of Mayne

It was a tough night for Mayne. Not only was he made to look silly by Cameron in the second term, he also got an accidental whack across the face from the Lions star during a third-quarter contest. The veteran Pie, in his first AFL game since returning from concussion, initially remained on the ground before heading to the bench to be checked out by the club’s medical staff. He was declared fit to proceed, leaving Beau McCreery, notionally playing his first game, needing to keep cooling his heels as Collingwood’s medical substitute. There were plenty of bruising moments on the night, including a strange one late in the second term in which Magpie Taylor Adams briefly looked worse for wear after an off-the-ball incident with Lincoln McCarthy, who appeared concerned for Adams’ wellbeing in the immediate aftermath.