Carlton coach David Teague admits that his players are confused by the controversial interpretation of the holding-the-ball rule and seeking clarity.

Early this season, it became less important for a player to have prior opportunity to dispose of the ball when they took possession. The umpires are now looking more for the effort a player makes to kick or handball.

Blues defender Sam Petrevski-Seton became frustrated at Optus Stadium on Sunday when he was deemed to be holding-the-ball when tackled by West Coast’s Jack Darling, without having any chance to dispose of the ball. 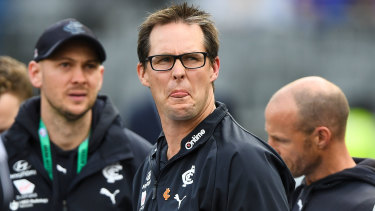 Confusion reigns: Carlton coach David Teague has added his voice to the calls for clarity on controversial holding the ball rule.Credit:Getty Images

Carlton will try to end a two-game losing streak when they play Fremantle at Optus Stadium on Saturday.

Jack Martin looks likely to be sidelined with a calf injury, while Mitch McGovern should return. David Cunningham is less a chance, but will try to prove his fitness.

Teague said he will continue to rotate his player and play his best available team.

“We're going to put our best team out and if our players feel good we'll play them,” he said.

“We're not going to sit here and schedule who is going to miss what [match]. We'll manage it week by week.

“Today, I thought Paddy Dow played really well in our game beforehand (against West Coast’s reserve players). Caleb Marchbank played his first game this week, Sam Philp, Josh Honey, Cam Polson, we've got a list of guys at the moment that aren't playing in our team that we'd comfortably play in our AFL side.”

After playing the Dockers, Carlton will head to Darwin to play the Gold Coast Suns at TIO Stadium.

Inglis first to admit player behaviour ‘worst it has been’