The MCG’s capacity has been increased to 75,000 but the attendance is likely to fall considerably short of that figure when Carlton and Collingwood meet on Thursday night. 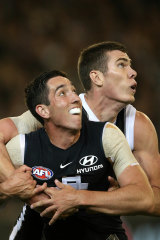 The fact that both the Blues and Magpies lost in round one have hurt the chances of reaching the the new threshold – announced on Tuesday – with industry sources instead expecting a crowd of between 55,000 and 60,000 for the clash between the traditional rivals in what is a Carlton home game.

A crowd above 50,000 would still exceed the round one capacity of the venue, with the State Government having given the green light for Victorian stadia to move from 50 per cent full to 75 per cent full at a time in which there are no active cases of COVID-19 in the state.

However should the crowd fall into the anticipated bracket it would fall short of the world record attendance since the start of the pandemic, which was reached when two Twenty20 matches between England and India in Ahmedabad drew crowds of 67,200 and 66,352 earlier in March.

The last MCG meeting between Carlton and Collingwood drew 69,289 on a Saturday afternoon in May 2019, although a Sunday game in June the previous year yielded just 53,706.

The sides met last season at the Gabba in front of 9033.

Melbourne Cricket Club chief Stuart Fox has encouraged patrons to get to the ground well ahead of the 7:20pm first bounce on Thursday.

“Everyone will need to scan a QR code coming in,” Fox told SEN on Wednesday.

“Obviously there’s concern about getting fans in before the first bounce, [so] I strongly encourage people to get to all the games across Victoria earlier than normal.

“If you’re turning up 20 minutes prior, we can’t guarantee you getting in quickly and before the first bounce.”

Depleted Dragons still confident of mixing it with NRL’s best