FOLLOW ALL THE ACTION ON THURSDAY NIGHT WITH OUR LIVE COVERAGE OF CARLTON v COLLINGWOOD FROM 7pm AEDT.

Carlton coach David Teague is adamant he won’t be drawn into talk of early season pressure, as his team heads into Thursday night’s clash with arch-rivals Collingwood attempting to avoid slumping to a 0-2 start for a ninth consecutive year.

Teague confirmed that big money recruit Zac Williams will make his debut against the Pies after missing the season opener through suspension, while vital playmaker Jack Martin will also return from a calf injury. 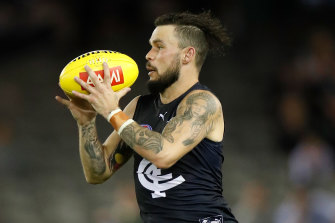 Zac Williams will make his Blues debut on Thursday.Credit:Getty Images

Thursday’s match looms as a vital early indicator for the Blues, who have lost their first two matches of the season every year since 2013.

That was the year the Blues last played finals, despite not making the eight – they took Essendon’s place following the fallout of the supplements saga.

But Teague said it was far too early to be talking about September.

“It’s our second game of the year, so you won’t catch me buying into that sort of thing,” Teague said.

“We want to go out and win, don’t get me wrong, but you can play really well and get better and not win at this time of the year. I think a couple of years ago Collingwood lost their first few and played in the grand final.

Jack Silvagni will come out of the side that lost to Richmond last week after injuring his shoulder. Silvagni has avoided serious injury and there is some hope he could be fit to take on Fremantle in round three.

The return of Martin and Williams could spell trouble for young wingman Lochie O’Brien, who has struggled to cement a place in the senior team since being drafted in 2017.

Carlton’s match committee could opt to drop a tall, but that seems unlikely given how well Levi Casboult and Oscar McDonald played together in the second half against the Tigers.

McDonald started as the injury substitute but Teague admitted he could be promoted to the starting 22 after a strong debut performance.

Teague has also joined Western Bulldogs counterpart Luke Beveridge in hitting out at the new VFL/East Coast competition rules, which some clubs think could stunt the development of players trying to make their way into the seniors.

The VFL is this season trialling zones for all stoppages, meaning each team needs to have a minimum of three players stationed inside 50, including a pair in the goalsquare.

“If you’re looking for a rule to be able to see if this will this help the game going forward, whilst also having the guarding the mark rule, well which one is it?

“I’ve heard a couple of other coaches and I’m probably aligned with them. Watching it, it didn’t sit well with me, it didn’t feel like it was in the tradition of the game and the way the game should be played.”

The Shaw effect: New North go on the defensive