Staggs was allegedly filmed while engaging in sexual intercourse with a woman.The Herald has been told the video was consensual, although Staggs hadn't agreed to its release. The NRL will speak to Staggs this afternoon but the 21-year-old is not accused of any wrongdoing. 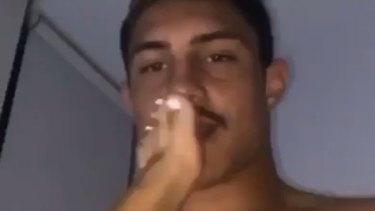 Kotoni Staggs in a still from the tape.

The Broncos released a statement on Tuesday afternoon. "The Brisbane Broncos have been made aware of a video recording involving Kotoni Staggs being circulated on social media," the club said.

"The video is of a highly personal nature and has been released without his consent. The club is working closely with the NRL Integrity Unit, having alerted it as soon as becoming aware of the issue."

Staggs has also sought legal advice and is expected to pursue the matter with police.

‘Not time to be picking favourites’: Brad Fittler’s warning to Broncos over Kevin Walters