Despite a 62-point win over the Brisbane Lions at the Gabba, Collingwood coach Nathan Buckley was playing it cool. Last year at the same venue, the Lions had run the Pies to within a kick. Much hype – and a big crowd – had surrounded this game.

After last year’s match, a shootout, Buckley had been less than impressed with his side’s defensive work. This time, they’d limited the Lions to eight goals, and looked a far more organised, clinical unit. 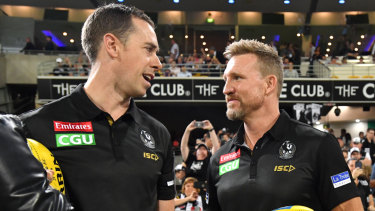 Tactical triumph: Nick Maxwell and Collingwood coach Nathan Buckley after the round 5 win over Brisbane in front of a sellout crowd at the Gabba.Credit:AAP

“We’re trying to add to our defensive integrity. I thought we were able to defend our front half a lot better, and the number of turnovers we had in our front half was encouraging,” he said.

“Brisbane have been the best stoppage-scoring side in the comp in the first four rounds, and we kept them to one goal, which was from a centre-bounce goal in the first quarter. So that was a really solid effort.”

Buckley had played what he called his “best tagger”, Adam Treloar, on Lachie Neale and Treloar took the points handsomely, stopping the hottest midfielder in the league and winning 36 possessions of his own.

“There’s an argument through the competition at the moment about taggers, and the effectiveness of them,” Buckley said. 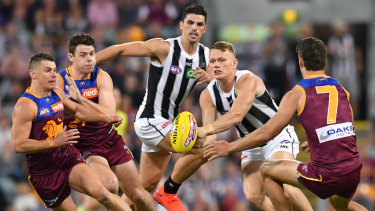 Handy: Adam Treloar (second from right) dominated in the midfield for the Magpies.Credit:AAP

“And we have a couple of go-to guys who can do a job for us when we feel we need it, but we also want to have a balanced midfield that can defend as well as attack.

“Sometimes the names that we have used aren’t associated with defensive roles. But Pendles [Scott Pendlebury], Taylor Adams, Adam Treloar, James Aish, Chris Mayne, Levi Greenwood, to name a few, will have defensive roles at times.

“Largely I thought we were able to hunt the ball really well and impose our brand of footy, which is largely going to be our focus.”

The Magpies’ flexibility in attack was also on show. This time, it wasn’t Jordan De Goey dominating: Jaidyn Stephenson was too slippery for his opponents all night, and Brody Mihocek kicked four goals while doing a power of work further upfield. 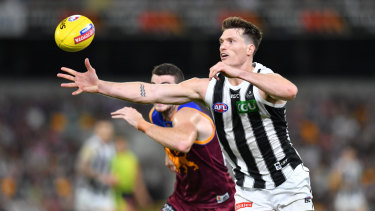 “For a bloke who’s only played 20-odd games of footy, he’s underrated,” Buckley said of Mihocek. “His work-rate’s huge, he impacts in the air and on the ground, the amount of bullocking work he does for his teammates is not unnoticed.

The Brisbane Lions have problems that go beyond the loss. Key defender Harris Andrews pinged a hamstring, as did midfielder Rhys Mathieson, on top of the loss of Zac Bailey. Both will face tests this week.

Coach Chris Fagan said his team made too many mistakes, especially in the back half, where they made “turnovers you couldn’t defend”, and said there could be additional unforced changes to the side.

“I don’t want to discuss who should go in or out of the team tonight. But the NEAFL team played alright, they’ve been in pretty good form, so there’s some guys there that will obviously be a chance for next week.”

But he also took nothing away from the visitors. “They’re a really good side, Collingwood, and they can make you pay for your mistakes as good as any team. They played very, very well.”

Maroons reveal ‘lapse’ that cost them