A brilliant snap from Josh Kelly with one minute to go ended Sydney’s unbeaten start to the AFL season in dramatic fashion, steering Greater Western Sydney to a pulsating two-point win.

A five-goal haul from Lance Franklin seemed certain to deliver the Swans their fifth straight victory – especially on an afternoon where the undermanned Giants blew chance after chance in front of goal. 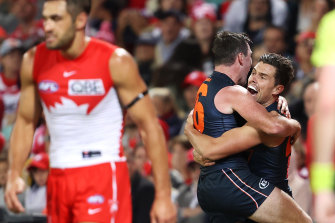 Brent Daniels and Josh Kelly celebrate after the Giants’ late goal at the SCG.Credit:Getty

It was no less than what the Giants deserved after stifling the slick ball movement that has won the Swans many admirers this season, forcing them wide and long, and turning the contest into more of a scrap than a shootout.

Had they made the most of their opportunities it would have been a much more comfortable win – but coach Leon Cameron, who was under huge pressure after GWS opened their campaign with three straight losses, will take the four points however they come.

Franklin finished with the Brett Kirk Medal for best afield, having taken his career tally to 955 with his bag of five. It was his highest return this season, after three-goal displays against Adelaide and Essendon.

He needs just 45 more to become the sixth man in VFL/AFL history to reach 1000 goals. If he can stay on the park often enough in the remaining two years on his contract, it looks far more likely than not.

The veteran forward was in rare form, producing the goods when Sydney needed him to in response to multiple attacking waves from the Giants.

Franklin finished with at least one goal in every quarter but, when the game was on the line at the death, his teammates were unable to find him.

The Swans, who lost Isaac Heeney and Dane Rampe to injury last week, were hobbled in the second half by an injury to in-form ruckman Tom Hickey – but their casualty list still pales in comparison to the Giants, who somehow found a way to record one of their most memorable derby wins.

‘I got it wrong’: Knights CEO opens up about Brown debacle