The Bulldogs have become just the second team in history to go three straight weeks without scoring a point as they were put to the sword by the Rabbitohs on Good Friday.

Cody Walker celebrated two tries and set up another in the 38-0 drubbing, but could be in strife for dropping an elbow into the back of Nick Meaney’s head that was described as “deliberate”. For Canterbury, scoring points will not get any easier when they host heavyweights Melbourne next week. 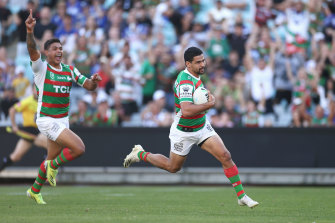 Cody Walker sprints away for one of his two tries on Friday afternoon.Credit:Getty

However, Souths have Benji Marshall ready to slot into the halves if Walker did have to spend a stint on the sidelines.

Walker pushed up in support when Damien Cook made a couple of easy breaks up the middle and scored a couple of tries.

He dropped the ball on to the boot for new dad Alex Johnston to score his own four-pointer.

The real highlight for Souths fans came when off-contract skipper Adam Reynolds raced away for a try in the final minute and kissed the Rabbitohs emblem on his jersey. His future at the club is uncertain with Souths having the weekend to weigh up whether to offer him more than a one-year deal.

They were travelling so well that coach Wayne Bennett had the luxury of giving Cook a 15-minute early mark along with Cameron Murray.

The Dogs enjoyed five straight sets at one stage in the first half but could not break through.

Souths then went on the attack and were over for the first points of the afternoon through Josh Mansour, Mitchell’s final pass even better than Mansour’s weaving finish.

Mitchell got a try himself late in the game when Marshall spotted him and put through a lovely grubber.

Things became heated at one stage when Walker did not take kindly to Kyle Flanagan laying over him before playing the ball. Walker shoved the No.7 in the back and a melee erupted.

Bulldogs coach Trent Barrett will be starting to wonder how long he will need to wait before his side scores again.

Despite enjoying plenty of field position, being tackled 35 times inside Souths’ 20-metre line playing with plenty of spirit, Canterbury never really looked like scoring. Renouf Atoni being held up just short of the line in the first half and Tui Katoa being collected just metres out in the second was as close as they came.

Canterbury’s failure to score for a third week in a row made them just the second team to achieve the unwanted feat after Cronulla in 2014.

The Bulldogs also look set to be without Jack Hetherington in coming weeks after his discipline again let him down. 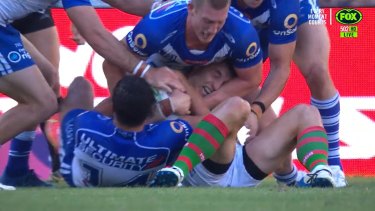 Jack Hetherington was put on report for a crusher tackle on Cameron Murray. Credit:Fox Sports screengrab

The fiery prop was placed on report for a crusher tackle on Cameron Murray. Souths kicked the penalty goal, then Hetherington steamed down field from the kick-off and tried to flatten Mark Nicholls with a shoulder charge. Luckily for Hetherington he got nowhere near Nicholls, but referee Grant Atkins was unimpressed and ordered him to clean up his act. 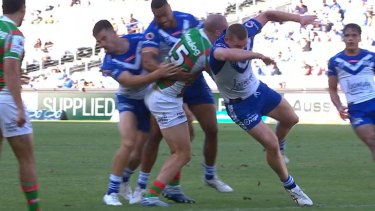 Hetherington has played just 27 NRL games but is facing being hit with a sixth suspension.

While it doesn’t look good for Hetherington, Murray did back into the tackle, and Phil Gould made the comment on the Nine commentary: “We need to find a reason why players are backing into tackles because there is a lot of undue pressure on defenders.”

In the end, Nathan Brown did himself out of a job