The Western Bulldogs will devise a battle plan to hinder Max Gawn’s run from stoppages in a bid to quell a man who could become only the second ruckman to claim the Norm Smith Medal.

The Bulldogs have taken note of Gawn’s stunning effort against Geelong in the preliminary final when the Melbourne captain and All-Australian ruckman stormed around Perth’s Optus Stadium and booted five goals in one of the great finals’ performances of recent times. 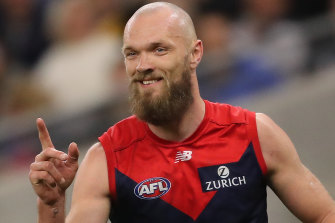 While dominant in the ruck with 33 hit-outs against the Cats, Gawn’s ability to run was clear, and he will test veteran Stef Martin in the showpiece event next Saturday. However, hardnut Tom Liberatore said he and his fellow Bulldog midfielders needed to ensure they set up well at stoppages to stymie Gawn’s impact when exiting.

“I think his (Martin’s) contest initially at the stoppage will set the tone for him. We all know Maxy is a good runner. That’s probably for us to negate as well, and high defenders,” Liberatore said on Friday.

“But you have got to make sure you stand … on his (Gawn’s) side, just make sure you can negate his influence at the stoppage. That should be able to quell his run away, just checking his run sort of thing, because he is, obviously, a pretty strong runner.” 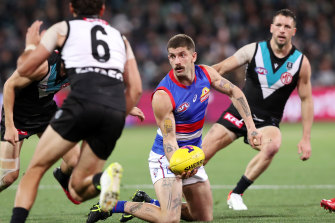 Gawn was in excellent touch in the two matches between the clubs this year. In round 11, when the Demons claimed a 28-point win, he polled nine AFL Coaches Association votes after his 27 hit-outs, 21 disposals and a goal, when largely opposed by Jordon Sweet. In round 19, he did not poll an AFLCA vote despite having 18 disposals and a whopping 56 hit-outs, largely against Tim English, in the Bulldogs’ 20-point win.

Now comes the battle-hardened Martin, who had three years with Gawn at Melbourne, and knows how he plays.

“His (Martin’s) experience and knowledge around ruck contests and how to negate Max, I am sure they had a fair few battles … when they played together,” Liberatore said.

“He adds another layer of competition to the opposing ruckman. He makes it a lot more predictable for us to know where the ball is going.”

Essendon champion Simon Madden is the only ruckman to be voted Norm Smith medallist, having dominated Hawthorn in the 1985 grand final. He has urged Martin to not forget his own offensive game.

The Bulldogs had the day off on Friday but will have a solid training session on Saturday, where defender Alex Keath (hamstring) and Laitham Vandermeer (hamstring tightness) will look to push for selection.

Liberatore praised vice-captain and fellow father-son product Mitch Wallis for the manner in which he continued to conduct himself, despite Wallis having little hope of a recall.

Wallis has managed only six senior matches this season, none since round 17, and will be one of the hard-luck stories of grand final week, particularly as he missed the 2016 premiership because of a broken leg. He is likely to consider his options once the season is done.

“Most of the rest of the boys that aren’t playing, their training standards and how much care they have put into training, making sure the entirety of the group is at their best, that’s probably a key to how we have been going,” Liberatore said.

“Yesterday (Thursday) at training, Mitch was pushing blokes to do extras, those blokes are playing … his leadership has been extremely selfless.”

Pies member Hatley confident of getting enough signatures for EGM