Richmond's Jack Riewoldt believes the breakdown of coach Damien Hardwick's marriage and his new relationship with a club staffer will not affect the playing group in a negative way.

Hardwick recently announced his split with wife Danielle before reports emerged that the three-time premiership coach had begun a relationship with a staffer in the club's commercial sales team. 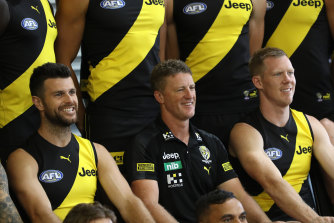 Jack Riewoldt (right) says Damien Hardwick (centre) had addressed the issue of his new relationship with the playing group.Credit:Getty Images

Richmond last week said the relationship did not breach any of its club policies, while Riewoldt said on Monday that Hardwick had addressed the issue with the playing group.

"Dimma [Hardwick] sort of already addressed it this morning [in front of the playing group] and it is business as usual for us.

"I suppose it [the news of the split] does [take you by surprise]. You never predict something like this but these things happen in people's lives and we just move on.

"You never like to see something like a marriage break down and an end but it happens in life and we move on and we continue to support the individuals."

Riewoldt dismissed suggestions that the relationship between Hardwick and the staff member was a poor look from a gender equality standpoint, given Hardwick is in a much more senior position.

"I think that is a really long bow to draw. We feel we have been at the forefront of a lot of issues and women's footy, we are extremely proud of our women's footy program."

Riewoldt also said the club would continue to support Sydney Stack, who was recently released on bail in WA after he allegedly breached the state's coronavirus laws.

Finals a mathematical hurdle for Demons