On Monday at Punt Road the Tigers' senior players and triple premiership coach Damien Hardwick returned to training in the now familiar position as defending premiers.

Hardwick addressed his marriage break-up briefly and politely in public to waiting television cameras, then in private with his players, a week after the club confirmed they had "no concerns … under club policy" that he was now in a relationship with a female member of the administration. 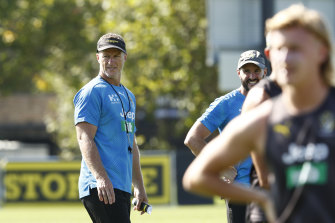 While captain Trent Cotchin made it clear he didn't want to talk to waiting media, it was left to champion forward Jack Riewoldt to declare the situation “business as usual” on the football front.

Riewoldt answered as best he could questions about Hardwick's separation that, at the very least, surprised and saddened those close to the 48-year-old coach and his family.

Although Riewoldt's description rang true for those at the club on Monday when they saw Hardwick – who despite occasional public outbursts of frustration generally adopts a "never explain, never complain" attitude – bounce in to work ready to go, the effect on the club remains to be seen.

The coach knows what is required of him to do his job well, having admitted after last year's grand final that his reluctance to accept COVID-19 restrictions affected the team, saying "the reality is if I'm struggling, the players are certainly going to feed off that energy" .

He also understands why some players are shocked at what has happened and appreciates they will need time and raw conversations to adjust to the new light in which some – certainly not all – of his most loyal lieutenants now see him.

But his demeanour allowed most players to maintain a guise that suggested if the personal issues were to have any impact on the club they would be minimal.

They showed in 2020 that they could overcome all manner of distractions, including Hardwick's internal struggles, defeating Geelong in a hard-fought grand final. Early wins this season will push the very public private matter well into the background because for all the posturing from clubs that's what matters most.

That doesn't mean senior people at the club are underestimating what lies ahead as there are very few road maps for how modern, often superficially virtuous, football clubs handle such matters despite the situation being a classic conjunction of events – a very public and long-standing personal relationship breakdown, and the interaction of a senior staff member with a more junior one, albeit in a separate section of the organisation. 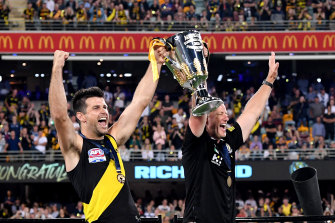 Richmond may not have couched it in such terms, but the reality is that the senior coach in any club holds more cards than anybody bar the CEO and the president, both who have remained, to this point, silent on the matter publicly.

The club released a statement addressing that power dynamic, saying they were satisfied after examining their human resources policy that they were comfortable in workplace terms with the situation, as marketing executive Alexandra Crow did not report to the coach.

Beth Gaze, a professor at Melbourne University's Law School, says it appears from afar that the Tigers have handled the issue appropriately from that perspective.

"One of the concerns organisations have is that if someone has power over somebody else's career that there may be some favouritism and that can, of course, really poison the workplace and can make relationships difficult," Gaze said.

"The consequences of [such a relationship] should not rest on the woman or the more junior person and that is why organisations are in a sense saying if you are the senior person then it is your responsibility to make sure you have disclosed this and removed yourself from any control over their career.

"The rest of it is awkward but there is no way you can avoid those emotional consequences."

Given there is no way of avoiding the emotional fallout, management led by CEO Brendon Gale and president Peggy O'Neal will need to be on their game.

Even though football clubs, generally speaking, get on with the job (Richmond are not the only club dealing this summer with marriage breakdowns or interoffice relationships that not everyone within the office are celebrating), this turn of events has saddened many.

What effect the marriage breakdown will have on those at the club close to the coach and his wife remains unclear; as we have seen, Danielle Hardwick and daughters were embraced by the captain's wife, Brooke Cotchin, at Christmas.

Adding to the complexity is the fact the Tigers' extensive network of tight personal bonds – common in AFL clubs but rare in most other workplaces – have been cited as one of the secrets to the Tigers' recent success with the use of anecdotes and connected stories a key part of the coach's modus operandi in recent years as he established a tight bond with his players.

The notion of being a "Richmond man" and concepts of mindfulness sat nicely beside Hardwick's occasional public reference to Mrs Hardwick's influence on his thinking, words that smoothed his rough edges and endeared him to the public whenever he apologised for overstepping the mark.

Family and football even intertwined before the 2019 grand final in a moment captured in Konrad Marshall's book Stronger and Bolder when Hardwick gave each player a rock to write the name of the person they would dedicate their performance to as he argued it would make them more determined to succeed. He then held up a large rock carrying words revealing his own motivation, Danielle and family.

Such public and private expressions from the coach add another layer of complexity to managing the situation.

Despite all that, officials from other clubs share the Tigers' view that their performance won't be affected much, with the players' pride in their performance paramount and the leaders experienced enough to allow Hardwick's role to be one of alignment.

Many have been through change with Hardwick before as the coach began his career as a command-and-control coach who would stop drills midway to tell players where they should be and the decision they should make.

At that point Hardwick was less about finding time to have a coffee with players and more about using the time to talk about their positioning and what the numbers said about performance. His dress sense was chided, his down-to-earth nature and loyalty to them celebrated, but the emotional rollercoaster he took many at the club on was exhausting.

It wasn't until the nadir of 2016 that he overcame his controlling instinct to give his best decision-makers licence to play and gave fringe players roles that emphasised their strengths with their pace giving the Tigers numbers around the ball.

He, relaxed, opened himself up to learning and created a game plan that one assistant coach said boiled down to Richmond taking the ball forward under pressure.

They scored off turnover and players such as the skipper led the way in creating a group of low-possession, high-impact players.

The so-called "simple" game plan is now, after four years of refinement, described by one experienced assistant as like an orchestra that makes the difficult coordination of disparate parts seem effortless in their creation of a masterpiece.

It is a turnaround that has Hardwick on the verge of equalling such coaching greats as Kevin Sheedy, Allan Jeans, Ron Barassi, Tom Hafey, David Parkin and the man he has shared so much with, Alastair Clarkson, with four flags.

Richmond are sticking with the coach, as they have before in trying times, hoping for business as usual.

After such a dramatic 2020 it might seem business as usual but time will tell what the real impact will be in season 2021 with the exhausted Gale telling 3AW pre-Christmas that they will have no option but to get on with it.

"We’ve just got to find a way to recharge and re-energise and renew and we will, because that’s the way our caper rolls," Gale said.

Breaking out in 2020: The AFL contenders who could create a buzz

Bulldog Hunter should give up the vice-captaincy after crash