Had Tom Papley been granted his wish to become a Carlton player, the Blues might be on the edge of the eight. But the Swans would very likely be worse, amid their deepest recession since Paul Keating gave us the one he felt we needed.

Papley sought a trade to Carlton for personal reasons, having his family and girlfriend based in Melbourne. Sydney were willing to deal him, but only if his exit was tied to the arrival of Joe Daniher from Essendon. 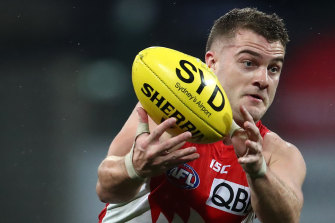 The Bombers had a steep asking price for Daniher. They didn't really want to trade him for draft picks, because they felt they'd have to replace him in an iffy forward line that didn't have another potent key forward.

So, they rejected Sydney's best, final offer of pick nine – which would have come from Carlton – and a future first rounder for Daniher (with the Dons expected to send a later pick back). Daniher was, like thousands of daily commuters, stranded at Tullamarine and unable to get to Sydney.

As a (restricted) free agent, he'll surely get his wish this year if he still decides to go, though Sydney might take a different position and Essendon will do well to get one top 10-12 pick this time given Daniher's injury record. Arguably, there are better options for him – the Brisbane Lions are the obvious fit – than the Swans, whose ambivalence about acquiring Daniher was evident in the stance they took in the trade period.

Their position has been utterly vindicated by Daniher's prolonged injury and Papley's ascension from pretty good small forward to one who's in contention for the Coleman Medal and the All-Australian team, and whose thespian work has received critical acclaim from Alastair Clarkson (who said Papley was an expert at milking frees) and seen him fined by the match review officer.

Consider how the Papley-Daniher equation has changed. Sydney were willing to give Papley plus a first rounder for Daniher. This year, Papley is clearly worth more than Daniher in the trading market.

Carlton naturally remain interested, but the goal posts have shifted and he will not be easily acquired if he repeats the trade request. Should he do so – and it's not clear that he will – Carlton will need to part with more than one first rounder.

Papley's family remains in Melbourne and, if he wants to come home, doubtless the Blues will still offer more dollars than Papley's current deal, which has two years to run.

Last year, Carlton privately suggested that their offer of pick No.9 for Papley represented slight overs, based on the market for small forwards. In retrospect, the Blues read the play well, Papley having proven to be worth that, plus something.

Whatever happens in the next act of Tom Papley's career, he's guaranteed a better part. As with other small forwards who score, he's gone from role player to a leading man.

But Papley, as tremendous as he's been, wasn't the one that got away for Carlton, who were blessed to pick up Jack Martin from Gold Coast without any draft cost.

During last year, Dan Butler, who was mired in the VFL at Richmond, visited the Blues and was entertaining a move to Royal Parade.

Butler was then behind Jason Castagna and Daniel Rioli in the pecking order for small forwards at Punt Rd, a reality – surprising as it seems now – that prompted him to look for another club.

If the Blues were interested, there were differences of opinion within about which recruits were priorities. Then list manager Stephen Silvagni wasn't keen on Eddie Betts and while he was not the driver for Papley – his underling, now recruiting manager, Mick Agresta had helped recruit Papley to the Swans – Silvagni was willing to trade for the forward.

Butler's management, clearly, knew that Carlton had Betts lined-up for a prodigal return and that Papley was slated to come in. There wasn't room for three small forwards (not counting Martin), and Butler found another suitor in St Kilda, who netted 2020's best bargain trade. North Melbourne had been the other, unsuccessful, suitor for Papley.

If there's a second act in Carlton's pursuit of Papley, the back-story to the script has been re-written. His value to Sydney has increased, the Swans might prefer a mature player to a high draft pick (they also have to bid on two highly-rated academy kids) and Daniher is unlikely to have any bearing on what happens to the small forward.

Carlton, knowing that the Swans will be reluctant to trade nearly their best player of 2020, can't invest too heavily in Papley basket.

"Tom is a contracted player," Carlton chief executive Cain Liddle told The Age on Saturday. "I understand the interest but it's not something we'll be discussing." 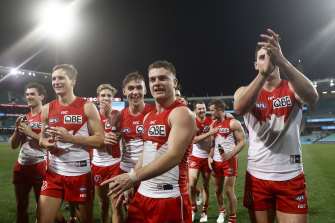 Swanning about: Tom Papley is part of a new generation at Sydney. Credit:Getty Images

The Blues have other important personnel questions that require resolution. They have to decide whether Matthew Kreuzer is retained, if they're committed to Paddy Dow and Lochie O'Brien – if they are, they'll need to play senior footy – and how Zac Fisher fits in (he's back to play West Coast this weekend, incidentally). Kade Simpson is just about done, Marc Murphy and Ed Curnow won't be supporting Patrick Cripps for much longer, either.

Carlton will have other irons in the trading fire. The Swans must consider upgrading Papley's contract, too, to one commensurate with his elevated form.

Whatever happens in the next act of Tom Papley's career, he's guaranteed a better part. As with other small forwards who score, he's gone from role player to a leading man.

McGregor’s future back in spotlight at Dragons meeting