FOLLOW THE ACTION IN ROUND FOUR WITH OUR LIVE COVERAGE, BEGINNING THURSDAY NIGHT AT 6.50pm AEST.

Footy’s new faster gamestyle has given every coach plenty to think about.

Whether it’s down to the man on the mark rule, fewer rotations or a combination of both, the game has changed – and mostly for the better.

Clubs employ analysts who work with the coaches to identify which trends are here to stay and which others might fade as fast as they’ve emerged.

Three rounds is a small sample size, but already it’s clear forwards are getting more time and space inside 50 due to quicker ball movement. 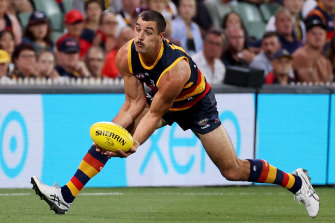 While much of the focus has been on the attacking side of the game, the biggest adjustments may come in how teams set up defensively.

Right now, there are defenders who are being exposed.

In the age of ‘team defence’, applying pressure further up the ground has been a must. The theory is simple: if forwards apply enough pressure, the defence can better set up to create a turnover.

It also allows defenders to zone off and help their team-mates, ensuring they’re rarely forced to play one-out.

Now, that is changing.

While the stats don’t show a dramatic rise in one-on-one contests in the forward 50, that can be explained by the fact the ball is moving so quickly that defenders often aren’t in position to make a contest with their opponent.

They’re so used to guarding space, rather than an opponent, they’re being caught out.

Dylan Grimes and Harris Andrews would be among the first picked in any defensive setup. They have the ability to both nullify their opponent, and also zone off.

But have they’ve been hurt by footy’s new rules?

Shorter quarters last year mean that isn’t a fair reference point. But comparing a few key statistics from the early rounds of this season with their averages of 2019 there is a clear difference.

As always, statistics can be deceiving, but it begs the question about whether this is an anomaly or a trend.

How much will defenders – even of the calibre of Grimes and Andrews – have to adapt?

If the current trend continues, it wouldn’t be surprising to see a shift in how defenders are viewed at the junior level, in terms of their ability to shut down an opponent, and also how they’re coached once they’re in the system. 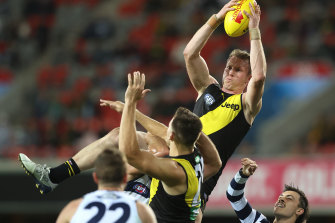 Right now, I assume every coaching group would be spending more time focusing on one-on-one contests, positioning and bodywork.

But that coaching is two-fold.

The best defenders, like Grimes and Andrews, are constantly making decisions about when to stay with their opponent and when to leave them to help team-mates.

Those decisions are no longer as simple.

Having said that – and I can’t believe I’m saying this – I do have a level of sympathy for the current defender.

The way they’re being umpired makes things that much harder.

The great defenders of the past, guys like Bruce Doull, David Dench, Glen Jakovich and Stephen Silvagni, got away with plenty.

They’d scrap and fight for every contest.

Now, though, there seems to be more ‘ticky-touchwood’ free-kicks being paid against defenders: whether it’s a slight arm around the body, or holding of the arm.

Often, you’re left wondering what their alternatives are.

Still, the current defender could do worse than channel a bit of Doull or Dench in making sure they beat their opponent first and then attack from there.

Darcy Moore is one player who’s got the balance right.

While Joe Daniher probably got the better of him the other night, Moore, this year, has shown he generally knows when to play tight and when to leave his man and fly for the footy.

So how do Grimes and the Richmond defence respond?

When Alex Rance went down with injury with injury before retiring, Grimes was the man that stepped up to take control of that defence.

But he also had a willing partner in Nick Vlastuin who could play the third-man up role to perfection and, as we know, Vlastuin is out injured.

It means Friday night’s clash against a potent Port Adelaide forward-line looms as an intriguing test. Could this be the round we start to see a shift in defensive thinking?